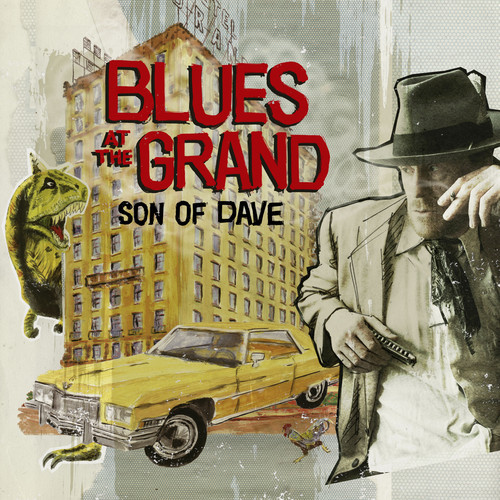 Son Of Dave – Blues At The Grand

Canadian singer songwriter and former Crash Test Dummies harmonica player Benjamin Darvil is much better known as Son Of Dave. New release Blues At The Grand is his fifth solo album, funded by fans through a successful Pledge Music campaign

The cast of supporting characters is impressive. The album was produced by Jimmy Hogarth (Amy Winehouse, James Morrison) and while Son Of Dave handles harmonica, piano, bass and guitar, he has also enlisted a variety of musicians to play with him including Joey Waronker (Beck, REM) on drums, Henry Olsen (Screamadelica) on bass, Will Foster (Fratellis) on keyboards and a variety of female vocalists such as Martina Topley Bird, Jessica Hynes, Josephine Oniyama, Naomi Yhap.

The resultant eleven track blues party album is loose and at times a little chaotic. If the idea was to create a jam session feel rather than a polished album then he succeeded. Musically there are tracks that are fun and lively although with some very good vocalists at his disposal, Darvil should perhaps have stuck more to his many instrumental duties. His vocals are a little ragged at times, although this does produce a contrast to the smoother female vocals that are too often pushed into the background.

There is plenty of rhythm and spirit in tracks like We Goin’ Out, a fast summer sounding jam, and there are slower tracks on the album too, like the purer blues sound of Poor Me. Miss Katelin is a passionate love song and here Darvil shows a little more vocal range. Old Mexico opens with a funky bass line and here the deep lead vocals do work quite well. And the short closing track If Only, a piano led lament for what might have been starts promisingly, although the vocals are replaced by the harmonica fairly quickly.

This is one for Son Of Dave’s fans, who will no doubt love his typically flamboyant harmonica work. For those not so familiar with his work it may be a good dance along party record, but I can’t see it broadening his appeal too much.