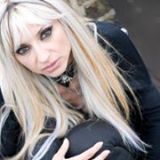 Grace Solero’s music has a certain raw energy that few artists can convincingly convey. Singer and guitarist Grace herself possesses a visceral voice of astounding range, and a presence and poise as a performer that points to past dance and gymnastics training. In the group she lends her name to, her star quality is matched by that of California-born, London-based lead guitarist Dan Beaulaurier, whose style displays a rare mix of technical mastery and real soul. Since first meeting while working on a production of Oscar Wilde’s ‘Salome’ at London’s Theatro Technis, the pair have been producing beguiling, otherworldly sounds that utterly befit such far-from-humble beginnings.

Their debut album ‘New Moon’ is a glorious sonic collision of musical influences. It includes the single ‘Apartheid’, playlisted by Bruce Dickinson on BBC Radio 6. Emerging like a dark pop-rock cloud with its gritty lyricism, soaring riffs and pain ridden vocals, New Moon has been critically acclaimed and championed by magazines including Classic Rock, Guitar Techniques and The Fly.

On the follow-up ‘Hundred Years Apart’ – released on September 30th through Wohone Records – Grace Solero’s core creative duo are joined by drummer Maurizio Liberato and multi-talented bassist Bjorn Zetterlund, who recorded and engineered the record at the band’s self-built North London studio. By turns both grand and understated, the second album knows when to apply full-force, bracing blasts of gritty noise, and equally how to hold listeners rapt with the subtleties of a single, sustained note or well-placed seconds silence. At their most sonically abrasive Grace Solero channel the emotional intensity of grunge icons such as Soundgarden and Smashing Pumpkins, at their most audacious and extravagant they bring to mind Muse’s stadium bombast, and, on a sublime, stripped-down cover of ‘Yard of Blonde Girls’, Grace delivers a performance which makes plain why frequent Jeff Buckley comparisons have been fully deserved.

Critics have also likened Grace’s vocals to Alanis Morissette, PJ Harvey and Skunk Anansie frontwoman Skin. For ‘Hundred Years Apart’ she recorded the majority of her vocal parts live with the band, and the results achieved this way testify both the strength of the talents at work within the group, and the cohesive chemistry between them. Needless to say, the band possess a captivating stage presence, which has been honed through extensive touring, everywhere from intimate clubs to large stages at outdoor festivals in both Europe and the USA. It’s a true one-of-a-kind artist who can say she’s performed alongside The Vibrators’ Knox (who in turn said Grace possesses “a world class voice”), Slade’s Noddy Holder (with whom she co-starred in a musical production of Dickens’ ‘A Christmas Carol’ at London’s Union Chapel) and Tristania’s Mariangela Demurtas – who appears on new single ‘Electro’ and describes Grace as “one of the most talented people I know”.