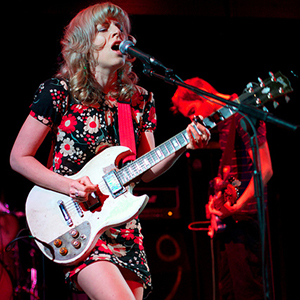 Chatting With The Rosy Crucifixion

“Develop interest in life as you see it; in people, things, literature, music – the world is so rich, simply throbbing with rich treasures, beautiful souls and interesting people. Forget yourself.” – Henry Miller

By naming themselves after one of the most important works by arguably one of America’s most important writers – why its Henry Miller of course – Glasgow three-piece The Rosy Crucifixion have chosen to be immediately associated with a certain type of artist.

In conversation and in sound, it’s clear from which wells the band choose to drink from – and please understand, it’s a great thing. From my recent conversation with the Anglo-American vivacious, absorbing frontwoman Emily McLaren (I won’t add blonde bombshell though it is tempting), an eclectic list of groups are recited as if she was reading from a script.

McLaren herself is the former lead singer of the now defunct (and again, brilliantly entitled) Michael Dracula, another Glasgow based group which, like so many in the past, will go down amongst Glasgow’s bohemia as releasing one the great and grossly unappreciated albums – 2007’s ‘In The Red’.

But we all know the past is a strange place, so let us deal with what is now.

I had the great pleasure in speaking to The Rosy Crucifixion’s lead singer about what could make her die ‘happy(ish)’, the bands recent meeting with ‘gentleman’ Mark E. Smith, what life holds for her group in the future, and how one manages to run a recording studio whilst fronting (in the opinion of this lonely scribe) one of the most exciting new bands currently touring more than they should be recording.

Link Wray is one of our favourite guitarists. Anyone who can make a guitar sound like a knife fight and get banned from the radio because their music sounds too delinquent is okay by us. Link Wray managed to get across everything that he wanted to say with one guitar, and bands like The Fall and The Birthday Party were also at their best when utilizing brutal repetition and minimalism. We’re not really aiming for a particular sound but if we managed to make a record that sounded as bleak and hopeless as Alex Chilton’s ‘Like Flies On Sherbert’ or Iggy’s ‘The Idiot’ then we could probably die happy(ish).

A few months ago you supported The Fall – and you met Mark E. Smith – what’s your recollections of that?

That was all a bit surreal: When we were coming up with names for the band, they had to pass the test of looking all right on an imaginary poster supporting The Fall, but we never thought it would actually happen (and then they spelled our name wrong on the poster, ha!). I have seen The Fall play better gigs, but Mark E Smith can do whatever the fuck he wants as far as we are concerned. We had the pleasure of meeting him afterwards and he was an absolute gentleman. He got us all a drink and said he’d caught some of our set (after first mistaking us for employees of the venue). Having Mark E Smith say “I quite liked that” (in relation to our set) is about as good as it gets.

It would be difficult not to discuss Henry Miller with regards to the Rosy Crucifixion – What does this author mean to you as people?

He’s just one of our favourite authors. It’s strange that writers like Miller and Bukowksi can get accused of misogyny when it’s quite clear from reading their books that they obviously loved women (and quite a lot of them). Also, the name passed The Fall poster test.

Noel Gallagher has spoken about the time he saw Johnny Marr on TV and decided, ‘right, that’s it, that’s who I want to be’ – At which point in your lives did you decide you wanted to make music?

You get obsessed with music as a teenager and then you pursue it to the detriment of all of the other things you are supposed to be getting on with in your life. I started making music back in the States when I lived in Providence. There have been a few moments in my life where I have heard a record and thought, “that’s it! That’s the sound that’s always in my head,” namely, the first time I heard The Fall; Joe Meek’s Outer-Space concept album “I Hear A New World” (or the Joe Meek-produced “Night Of The Vampire”), or Michael Yonkers’ “Microminiature Love”. I love music that reminds you that, despite the fact that many people blindly adhere to such things, there really are no rules.

Michael Dracula is a defunct band you’re obviously ‘associated’ with. What were the main reasons for winding them up, given that, from a musical sense, things appeared so promising?

I also understand you run ‘Green Door Studios’ in Glasgow, what does that involve?

Myself and (Guitarist) Stuart run the studio along with Sam from another Glasgow band ‘Casual Sex’. The studio is set up on a non-profit basis so that we can keep the recording fees down and get as many interesting musicians and bands in as possible. We also teach studio workshops for young unemployed musicians and I guess we’re one of the last few places still using tape. We’re all analog geeks and wanted to set up a studio such as Lee Perry’s Black Ark or Connie Plank’s Cologne studio where it’s all about creating a comfortable and creative environment. It’s hard to imagine the first Velvet Underground album being recorded in most modern studios.

I, of course, don’t wish to take the limelight away from yourselves, but what bands do you see coming through that one should be looking out for? (I’m still slightly obsessed with the Jacob Yates and the Pearly Gate Lock Pickers record)

That’s great, Jake’s record is actually the first album that Stuart and I recorded and mixed in The Green Door. We’re excited to be starting a new album with them at the end of the year. We’ve had the pleasure of working with so many talented bands and musicians over the last few years, and the music scene in Glasgow is probably as good as it’s ever been. There’s far too many great bands to mention but recently we’ve been working with The Creeping Ivies (from Dundee), Golden Teacher, The Amazing Snakeheads, Halfrican, Saint Max & The Fanatics, Eugene Tombs, Happy Meals, Slim Customers (from London), George Thomas, Hausfrau etc.

How difficult is it to be running a studio and finding the time to write new songs?

It’s a balancing act, but, luckily, none of us has time to get too precious about playing in a band – we’re just doing it for kicks!. As far as songwriting goes, I’ll write the lyrics and bring some songs along to practices half-written, but most of our ideas form out of us drunkenly jamming into the early hours

What are your hopes for this band and can we expect a debut album? Incidentally where can one get a copy of your new split release with the Wharves?

The first release we did with the ‘Some Songs Side By Side’ Glasgow underground box set last year we shared one side of vinyl with the excellent Sacred Paws. With the Soft Power release they asked us for a whole side. So we’re hoping the next release will be a whole record. Soft Power are putting the split LP out and you can pre order it from softpowerrecords.bandcamp.com/.

Who knows?! We would love to play some gigs outside of the UK. Our friends Halfrican have just come back from a Spanish tour and that sounded like a total blast. And if we manage to get a few free days here and there in Green Door we might even get an album done!