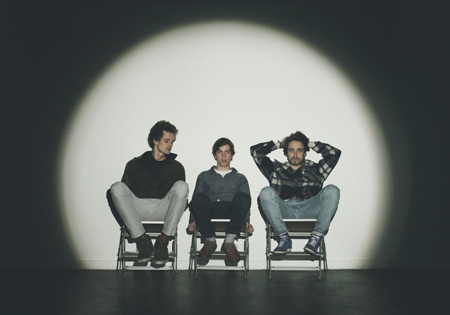 Electro pop trio Say Yes Dog will release the debut EP ‘A Friend’ on December 9th. A European tour will include dates at the Oxford Social Club in Reading on 18th December and London’s Hoxton Square Bar & Kitchen on 19th December. The band kindly interrupted preparations to answer some questions for Glasswerk.

Say Yes Dog is a pretty new name to UK music fans. How would you describe your music?
I guess we are somewhere in between the two worlds of deep club music and melodic pop.

Tell us a bit about how two Germans and one Luxembourger came together as a band.
We all met in The Hague in Holland at the same school. Pascal was studying drums, Paul and Aaron were doing sound engineering and one day we came together and it started with a big bang!

And who are your main musical influences?

It’s hard to point into one direction but I guess that our musical influences lay somewhere between the deeper club music from the time we lived in Berlin as well as the pop music from the 80’s and 90’s that we grew up with. In the end we share the love for bands like Metronomy, Hot Chip, or Mount Kimbie. Paul also really likes Bilderbuch.

You have an EP out soon and we recently featured a track A Friend on our site. What can you tell us about that song?

“A Friend” is a song that goes into a newer direction already from what we have been playing so far. It used to be a much more dancey track played by Aaron in his DJ sets. We re-arranged it, Paul wrote lyrics and it became a song that is one of our favorites to play live.

And I hear that there is an album on the way too?

We’re certainly working on songs for an album, but we are not going to rush things and cannot give you any release date yet. Sorry.

Have you played in the UK as yet, or will the shows in December be your first?

Yes, we played The Great Escape Festival, Liverpool Sound City and two shows in London. One was with Capital Cities at Xoyo which was great fun so we can’t wait to be back.

And what are the future plans for Say Yes Dog?

We’ve been playing quite some shows these past months and there’s another big tour coming up. After that we’re looking forward to rest a bit and lock ourselves into the studio to work only on the music.