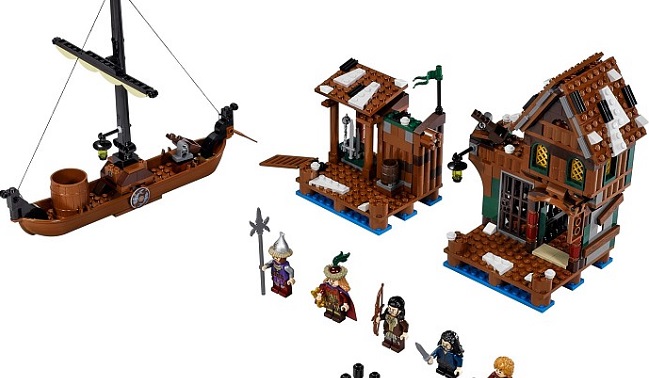 The Hobbit: The Desolation of Smaug continues the adventure of the title character Bilbo Baggins as he journeys with the Wizard Gandalf and the thirteen dwarves, led by Thorin Oakenshield on an epic quest to reclaim the lost dwarf Kingdom of Erebor.

79011 Dol Guldur Ambush (£19.99)-Fight through the Gundabad Orc ambush and into Dol Guldur! Build the fortress ruins of Dol Guldur where the Gundabad Orcs lie in wait for Beorn™ with their weapons and firing mobile catapult. There are traps everywhere in the old ruin to capture the great warrior. Can Beorn avoid the huge spikes at the entrance, hidden flick missile, deadly swinging hammer and axe traps?

79012 Mirkood™ Elf Army (£29.99) – Defend the Elven fortress against invading Orcs with the Mirkwood™ Elf Army! Repel the Gundabad Orc warriors in Mirkwood™ Elf Army with rotating, splitting tree, ambush function, weapon rack and six minifigures. The Orcs are trespassing on the lands of the great Elven king, Thranduil, and a thrilling battle is inevitable. Climb the rotating tree at the edge of Mirkwood Forest and keep watch. Flick missiles from the wall, then grab a weapon from the rack and attack! Split the tree in two for ambush mode to send Elven warriors flying over the wall and shock the Orc invaders.

For more LEGO® The Hobbit: Desolation of Smaug fun check out LEGO.com/TheHobbit

The Hobbit: Desolation of Smaug is in cinema’s everywhere on December 13th.

All products will be available for purchase from December 1st.