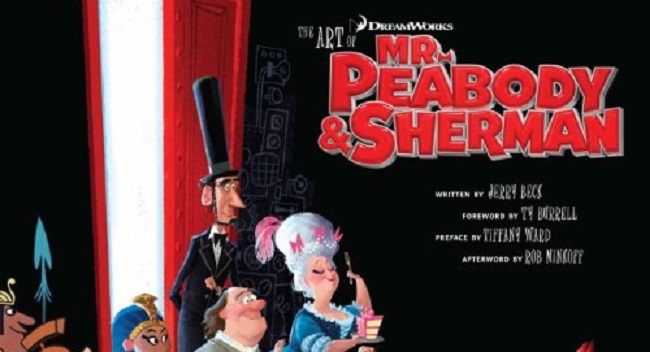 The Art Of Mr Peabody And Sherman Review

Art of Books seem to be constantly evolving, with no two books ever revealing the same animation secrets. This one is no exception. Slightly wordier than normal, this book gives the best overview of the animated film process. If you’ve ever really wanted to know how a CG animation is made, flip through to the end of the book to the ‘Building a Scene’ chapter. Over seven gloriously detailed pages, Mr Peabody and Sherman go through all the stages of production, from Story and Layout to Visual Effects. These is quite an unusual addition in an ‘art of’ book and give readers, especially younger ones a great overview into how animation is created.

The visuals are all stunning, with double-page spreads galore. There’s more of an emphasis on finished images rather than the sketchy stuff that I prefer, but that’s just a matter of taste. It also feels more technical with images being dissected for details on layout, prop design, colour keys content, lighting and even location scouting. Some double page spreads look more like schematics and that seems appropriate considering the type of film this is and is pitched perfectly at the film’s audience.

Written by Jerry Beck, it’s actually a book that I was really happy to sit down and read cover to cover, rather than dip in and out of the pages as I’d usually do. As someone who wasn’t around for the original show, I was totally charmed by Tiffany Ward’s preface. Her father, Jay Ward was the original producer on the show in the 1960’s and both he and the older show were bought to life by her informal description of the man behind the idea. Ty Burrell’s foreword is also lovely to read as his genuine love for the old show is evident through his fanboy introduction to the book.

A must have for fans of animation, the old series and the new film as this classic TV series is regenerated into a new feature animation by Dreamworks.