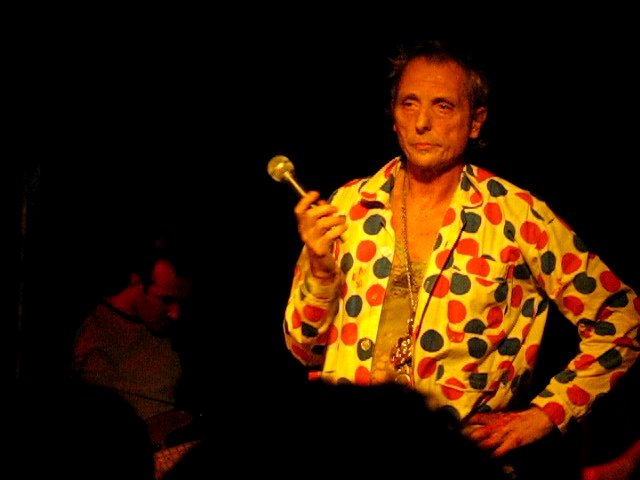 With repeated crowd cries of “You old cunt, you old cunt..!” midway through tonight’s Homosexuals show at Glasgow’s Centre for Contemporary Arts (CCA), anyone coming in late would have been forgiven for thinking they’d just stumbled across a secret and extremely under-attended Rolling Stones gig. Indeed, the obscenities screamed would have been more appropriate for Mr Jagger.

For those unfamiliar (I dare say one or two of you), the Homosexuals reign from the late 70s post-punk era and grossly unappreciated genre of (almost) forgotten artists… Or so I’m told from my older chum accompanying me this evening. Frontman Bruno Wizard is in town to play in conjunction with the Glasgow Film Festival, which, later in the weekend, would screen a new documentary on the man’s band and the ‘rollercoaster journey of a London punk who never sold out’. We’ll get to the Homosexuals later.

Prior, the CCA was treated to The Rosy Crucifixion – an eloquent, stylish, three-piece mish-mash garage-rockabilly and indie which should be well known by now to Glasgow’s gig going regulars. Even in the past, when at time their live sets have been let down by poor sound, they still manage to leave one gasping for air, for something great which they’ll surely deliver in due course. I have high hopes. Tonight The Rosy C turn up as a four-piece, the new mystery member appears onstage as a kind of pubescent ‘Bez’ type figure who would continually dance and smash a tambourine like his life depended on it throughout the set. Tonight, the CCA was the ideal venue for this band; the sound rings round the room and the noise from the amps are given their due. In terms of the set, regular tracks like ‘Winners’, ‘Sunshine Fuck Off’ and the majestic, not to mention best cover version yet of ‘Sinners’ from Freddie and The Hitchhikers (1961), are all delivered to near perfection. We’re also treated to a brilliant rendition of ‘Mr Pharmacist’, one perhaps more famously attributed to The Fall, but originally coming from another obscure garage rock act known as The Other Half.

What came next was completely unexpected, for me at least. The 63-year-old Bruno Wizard came to the stage dressed almost like a creepy children’s entertainer, draped from head to toe in a bizarre pyjama-like outfit, which appeared to be more Jason’s Technicolor Dreamcoat than 70’s punk. Thankfully the music was straight from the latter. The Homosexuals’ set turned out to be a steady mixture of fast-paced guitar driven, dare I say it, ‘feel-good’ punk songs, broken up by what almost became a political spoken-word concert from Mr Wizard. You’ll really need to watch examples of this guy on YouTube to get the full flavour of it all; I’m not entirely sure what he was on about, but by God it made sense at the time. Also struggling for domination was what people older, not to mention, ‘cooler’ folk than myself would describe as ‘classics’. But of course, my being born too late to sample these guys in their prime didn’t affect my understanding of quality of songs played. Tracks such as ‘Astral Glamour’ and ‘Hearts in Exile’ were snappy and delivered with gleeful punch. And in case you’re wondering, no, the crowd didn’t just randomly take it upon themselves to verbally abuse the older gentleman on stage.

Chants of ‘You old cunt! You old cunt’ were in fact demanded from Bruno himself, who told us there would be no more songs unless we obliged. Fair enough.

‘You’re Not Moving The Way You’re Supposed To’ was a fitting end to the show, given how reserved certain sections of the audience appeared. Who knows, another night, another crowd, The Homosexuals may have brought the roof down. Here’s hoping that old cunt comes back to Glasgow soon.