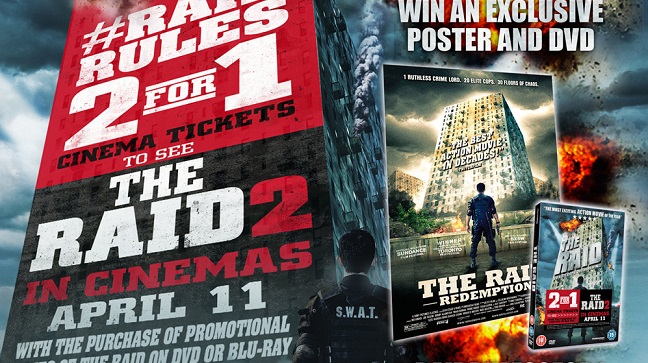 Due to the hotly anticipated arrival of The Raid 2 in cinemas on April 11th, Entertainment One UK have re-released The Raid on DVD and Blu-ray with a special Cineworld 2 for 1 ticket offer.

Don’t miss your chance to pick up this action packed classic, it’s guaranteed to set your heart racing with its stunning visuals and martial arts mastery.

Take advantage of the #RaidRules2For1, grab your specially marked promotional copies of THE RAID in store now, while stocks last! Be a part of our exclusive tweet-a-long on April 10th at 9pm in preparation for the arrival of THE RAID 2 in cinemas April 11th!

There are no excuses not to be part of The Raid phenomena in 2014!

To celebrate the re-release of The Raid, we have a fantastic competition that you simply can’t afford to miss out on. Not only do we have a DVD (with 2for1 offer), we also have a exclusive quad poster to give away.

Send you answer along with your postal address to editor@filmwerk.co.uk

The competition closes on 11th April