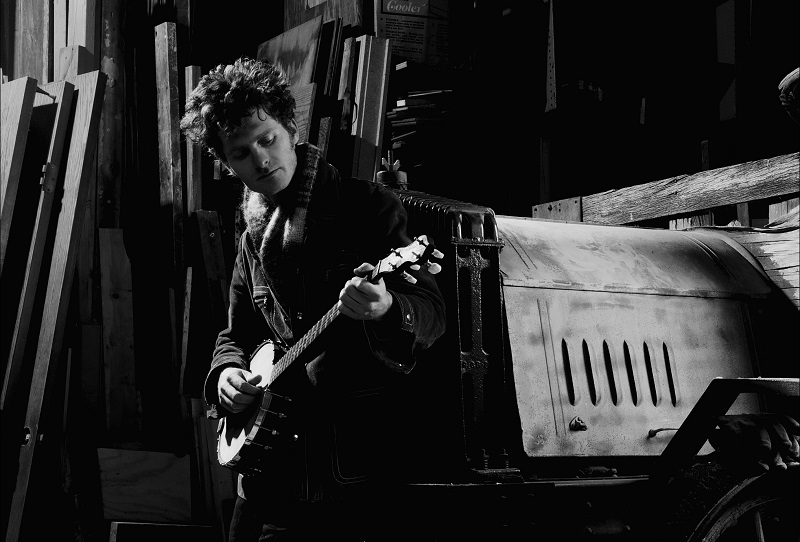 We caught up with Americana troubadour James Apollo ahead of his UK tour dates which start later this week to chat about his new album Angelorum, being on the road for most of his life and the intricacies of recording. Delve into the dusty trail of a wanderer’s life…

To the outside listener, Angelorum feels infused with the dusty spirit of the US desert – what do you think it is about your music that makes it feel so quintessentially American?

The landscape is not lost on me. I left Brooklyn and moved out west. I wanted the grandeur that doesn’t exist east of the Mississippi. I wanted the backdrops to old cartoons and westerns and Dr Suess books. I wanted it all to be real and when i found out it was, i stayed. The great thing about the West is that its universal. 2hrs outside of Los Angeles is a desert as remote as the Gobi. It’s a comforting feeling to know you can be there in a heartbeat.

We heard the first recordings of the album were destroyed in a fire, did you make any changes when you re-recorded?

Well, yes, but probably not on purpose. Things tend to get romanticized when they’re destroyed by fire. I remember those recordings as being far bigger than they probably were. I remember the heat of the July day, I remember the satisfaction, the connectedness of the band. I remember everything as if it were perfect. But it wasn’t perfect. I’m sure the piano was still out of tune and the tape machine kept kinking out from the humidity. We made sure that stuff didn’t happen when we rerecorded. We removed some of the imperfections. But me, I like imperfections.

Did it lend any particular poignancy to individual tracks?

When I found I had to redo a few things, it made it a bit more important, yes. I was repeating myself. I had to convince myself that it was better than we did before. It was an inner battle that i wouldn’t have otherwise fought. It made little things, little shakes and rattles, take on new levels. It charged everything. I wasn’t just making music, I was attacking it. Fighting back.

There was a reference to no longer being sad, but being angry – which do you think is the more powerful force and why?

Sadness is not a force. It’s a state. It’s a hard thing to escape. You don’t move, you just sink. It’s a great inspiration, and i want to wring it for all its worth. But sooner or later sadness stops working, and that’s when anger kicks in. It’s a tiger fighting an elephant. Two juggernauts, but I’d rather be the one with fangs. I’d rather be the hunter. Active. Moving. Hungry.

You don’t seem to have the best luck as you also got hit by a truck and were in rehab for a year. Did all that time for reflection have an effect on your creative output?

It’s a bit like the battle of sadness and anger. I was waiting to get hit. I knew it was going to happen. It was honestly the best thing that has happened to me in my adult life. Time stopped. Everything stopped. I read the Russians. I worried about bear attacks from the little house I was staying in, deep in the Appalachian mountains. I didn’t write while I was down. I just rebuilt. And when I got up again, I got up strong. Forged. Ready.

It’s been mentioned there are a lot of new influences and out of the box thinking on this record, what was the single biggest influence on the writing style for this record?

I had been listening to a lot of strange things. Mainly instrumental music. A lot of strange 60s exotica. Mancini. Martin Denny. Les Baxter. Stuff that is often seen as trivial, but is really unique. I’d write skeleton songs, a rhythm, a melody, a lyric. Then the band and i would start hanging arrangements on everything. We used a lot of weird percussion, vibraphones, mellotrons, stuff that could make beats or make melodies. I wanted to turn things around a bit.

Thematically a lot of your songs seems to cover a sense of isolation, do you think that’s something that comes from wandering for a lot of your professional life?

Not just professional life. Entire life. It’s not a tour, it’s a pilgrimage.
When I do get off the road, the 1st thing I do is go someplace to unwind. That’s usually in the mountains or the desert. Someplace way off by myself. I’m off the grid more than anybody else I know. A lot of times friends can’t even grab the concept of not having cell service.
I’ve never liked going home. I think i keep it purposely uncomfortable. It inspires me to keep moving. Wandering is just part of being awake.

You started touring at 16, you must have some pretty good road-tales…care to share one we might not have heard?

Hmmm, well there was the time we were passing through South Dakota, and the band went in a bar while I grabbed a few Z’s in the back of the van. 45 minutes later they all come running out screaming “the ice man’s gonna kill us! The ice man thinks we’re trying to sleep with his wife!”
I was annoyed, but being the only one sober, had to take the wheel for awhile.
I pulled over at a rest stop in the grasslands the area is known for. Everyone drinking and yelling and in a far state of inebriation, i threw ‘em out of the van and locked the doors. They all ran into the grass and collapsed under a sign.
In the morning I got and examined the sleeping beauts, all curled up under this sign.
it read
“DANGER. Rattlesnakes. Keep off grass”
We were even.

You’ll be in the UK later this month touring, what do you enjoy about coming over here?

We tend to fully embrace local culture. We were in York last time and the bass player disappeared. 45 minutes later he comes tumbling out of a shop in a full suit of armor, trying to hoist a battle ax. Honestly I think it was his true calling.
But, really, there is a huge difference in cultures. The crowds in the UK are so varied. There seems to be less taboo about going out and seeing music. We’ve seen 20 year olds go out with their parents and both of ‘em are tearing it up. That’s a rare and beautiful site.

Have you got any new records you’re listening to that you’re burning to share?

There’s a ton of great stuff coming out right now. What’s really wild is that a lot of great stuff is making serious inroads, its not just underground music that is interesting anymore.
But still, my favorite way of finding new music is going to the bins at charity shops, finding strange covers, usually involving sombreros and whipped cream and six-guns. Give that a few spins and see if I’ve learned something.