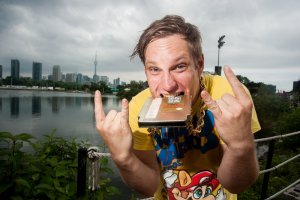 How do you sell MC Lars to the uninitiated?

This is hip-hop, but not as you know it. This isn’t two turn tables and a microphone, this is a white rapper, a laptop and a sampler. This is also one of the most well loved and well respected artists that you’ve never heard of, and I’ve got a feeling that suits him and his dedicated fanbase just fine.

Crammed into the basement venue area of the Surya bar in Islington, the intimacy of it all is a benefit to MC Lars’ warm nature, highfiving his way across the stage, acknowledging ardent supporters by name, Dave Grohl’s reputation as the nicest guy in rock would be in tatters if he was measured up against the nicest man in rap.

And clearly, rhyming about bitches and hoes would be horrendously out of character given the circumstances, instead MC Lars whips through songs old and new covering a wide range of topics including, but not exclusive to, space battles, obscure Simpsons characters, Edgar Allen Poe, hipsters and Moby Dick.

If that wasn’t enough, how about a surprisingly exhilarating freestyle rap about personal items that audience members chose to hold up in the air, yes, I’ll admit it sounds tacky writing it now, but this twist on audience participation would come close to being the highlight of his set, if his set wasn’t already setting the bar ridiculously high.

I doubt there are many, if any, other artists that can compete with MC Lars on all these counts, and that is why he is the best kept secret that you really need to know about in laptop nerdcore rap.