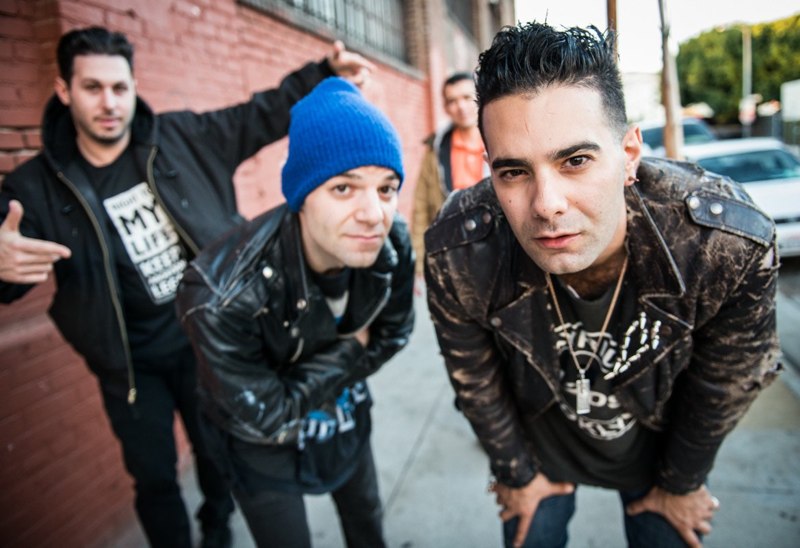 Glasswerk meets: The So So Glos

We reviewed ‘Blowout’ the new record from New York punks The So So Glos recently and were so impressed that we had to track them down for an interview. It was high time we caught up with bass player Alex Levine to find out more about how the Brooklyn band of brothers have spent the past 7 years and how they survived being outsiders of the scene long enough to be part of the new wave of US cool currently coming through Shea Stadium.

Hi Alex thanks for taking the time to speak to us, what are you doing today besides this interview?

I just woke up in time to do this interview, then it’s back to bed.

You’ve been playing together since you were kids – has much changed between you since then?

We’ve gotten older. We eat less baby food now, but we still pretty much do the same things and get into the same fights.

Does the family element ever put a strain on things or do you find it more of a binding force?

It’s all that comes with family. Cain + Abel all beaten and twisted into one. Like machine gun Kelly and Mary’s son. There’s plenty of frustration and strain. It binds us together as a force . It’s a schizophrenic energy, and it pushes us forward.

We absolutely loved your new record Blowout and we noticed a big British sound influence, is that an important part of your identity?

Thank you. We’re into all kinds of music. American and British rock n’ roll has definitely played a key role in the So So Glo identity. The Brits seem to historically have this magic way of taking American music and putting the most amazing spin on it. There’s always been this wonderful conversation that goes on between the two. I love that. So much of that British invasion stuff / 70s new wave powerpop was drilled into us by digging through our parents’ record collections. The Kinks, the Jags ect. They had a nice mix of American + British records.

Whilst your sound is firmly rooted in punk there are a lot of different elements and genres going on, who was responsible for your “musical education” growing up?

As kids we were hooked on MTV and our parents’ record collections. That was the way we grew up. We got the late 80s and 90s from the tube and radio and the 50s- 70s from their records. As we got older we kept searching for the stuff they don’t teach you in school and It became harder and harder to find. 90s hip hop is a major influence on my lyrics as is Desmond Dekker, Jimmy Cliff and many reggae stars. Lots of roots music. We were really into ska and punk as teenagers too. I found the first Specials record when I was thirteen and that was a major eye-opening experience for me. I remember listening to it over and over and it blowing my mind. It’s still one of my favorite records of all time.

20 days in the studio seems like quite a short amount of time for some bands and maybe quite a long time for a punk band, what would be your ideal recording scenario and why?

It really depends on what you’re trying to achieve. On ‘Blowout’, we spent a lot of time editing and taking out. Trying not to dump everything everywhere. I think that simplicity is the hardest thing to reach. I think you can spend a lifetime trying not to overcomplicate your life but you’ll probably end up doing it anyway and die with a million things unresolved. I don’t think of us as a punk band as much as an obsessive group trying to craft these perfect pop songs. They never do turn out perfect though, and we usually play them loud and sloppy. I guess they call that punk.

The album has a very celebratory feel about it and there’s an obvious poetic streak to your lyrical themes that doesn’t crop up that often in traditional punk, so we were wondering what your definition of a punk band was and what the genre meant to you?

There’s this bittersweet party going on in the record. It’s a victory for the underdog type party delivered in the face of depression and sadness, anxiety and panic. All that stuff is included in the party but at some point it becomes a movement because everyone’s there living and breathing it together. Then there’s someone at the party talking about a culture of overstimulation, over saturation and a lack of empathy. And that person is holding a mirror up to a culture and inviting everyone at the party to smash the mirror. To smash up the ego with real life human emotion, in other words.

My favorite type of art is inclusive, accessible and political all at the same time. It’s a comment on ourselves and the social institutions that bring us together and apart. I love the feeling of crying and laughing at the same time. That twisted melancholy that you can’t help but laugh at. That’s the sort of lyrical feeling I’m trying to emote a lot of the time. Punk means a lot to me, but not as a genre, more as an internal feeling that says “go with yourself,” to quote Fiona.

Tell us a little bit about the Shea Stadium which you’re involved with, seeing as you’ve been cultivating Big Ups who are really connecting over here in the UK at the moment…

Shea is a community space run by a bunch of artists and people. We helped get it going with our oldest friend / 5th So So Glo / producer, Adam Reich. It’s a public live recording studio and a great community of people who work very hard to bring a positive thing into NYC.

You talk about bringing the community spirit to your live shows, how is the NY punk community at the moment? Thriving or not? Who should we be looking out for?

“Heeney” is a great band. You should be looking out for them. As well as Staten Islands’ own, “Bueno”. Two amazing bands coming out of N.Y.C. Another band who is really blowing my mind at the moment is “Slothrust”.

Finally, any plans to come to the UK? If so, what would you enjoy most about visiting (apart from the shows of course)

Really can’t wait to come back. We love the UK. I’d like to see the Globe theatre and catch a Waterloo sunset!

‘Blowout’ is out now on Votiv/Caroline International/ Shea Stadium Records.

Who The F#@% Are The So So Glos? Find out here in this new video: