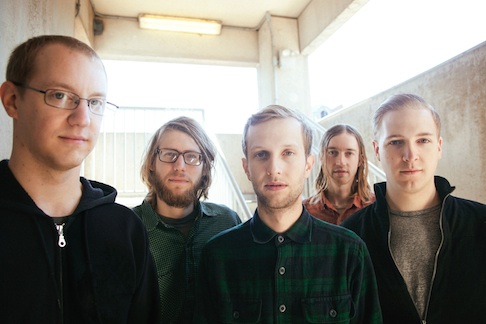 It’s easy to see how far La Dispute have come since the release of their latest album, ‘Rooms of the House’. The genre-defying Michigan four piece have slowly been building a loyal fanbase over the years, and with the release of their third album, have encountered the kind of attention they’ve deserved all along.

The venue is buzzing with activity and excitement – the show is sold out, and the line snakes around the corner and up the street. There is a decent-sized crowd for the musical stylings of opener Eugene Quell, whose grungy croonings are received well; songs like ‘That One Song’ have the audience captivated.

Atlanta quintet, O’Brother are used to larger stages (having joined Thrice on their Major/Minor tour) and their stage presence is quite something. Their set wins over the crowd, with songs like ‘Ascension’ and ‘Disillusion’ proving that soon, they’ll be headlining venues like Gorilla in the near future.

La Dispute’s appearance on the stage electrifies the crowd. From the first note of ‘Hudsonville, MI 1956’ the four-piece have the entire room screaming their lyrics back at them, just as passionately. Vocalist Jordan Dreyer is almost drowned out by the audience on crowd-pleasers like ‘The Most Beautiful Bitter Fruit’ (during which a pit opens up) and ‘You and I In Unison’.

New, slower songs such as ‘Woman (In Mirror)’ sit well with old favourites, and give Dreyer a chance to showcase his showmanship as the band’s frontman – the room is almost-silent, but for the murmuring of the crowd in unison with Dreyer as he cries ‘there are moments here, only yours and mine – tiny dots on an endless timeline’.

And as the last bars of encore ‘King Park’ ring out, tonight feels like just that – a brilliant moment in time, one of many created by La Dispute. Here’s to many more, and that endless timeline.