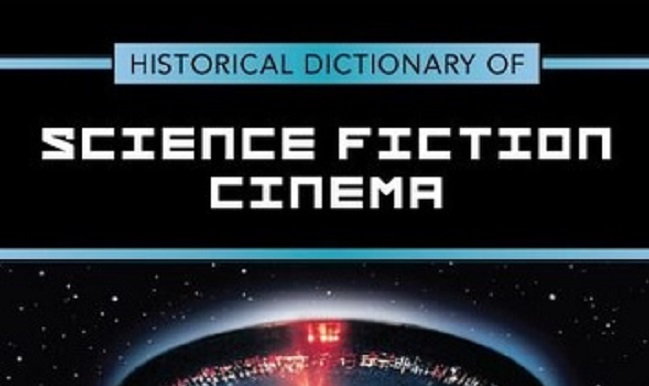 Sporting a black cover with an iconic image of a flying saucer with brimming lights from Close Encounters of the Third Kind this addition to Scarecrow Press’s library of Historical Dictionaries has confusingly a different cover to the other books in the series; it also seems smaller in size. However, the content between the pages is familiar and similar to other books in the library. Although in all probability intended as an academic reference book it, like others in the series is very accessible.

Science Fiction is like the thriller, a hard genre to firmly define or not define as crossing other genres. For example many may argue that the constant inclusion of Frankenstein films here should fall under horror as it traditionally has done. Yet it does not have a sub-section on ‘mad scientists’ or ‘The Invisible Man’ films which clearly fall under the latter and are both horror films and science fiction. True, Frankenstein was influenced by the scientific use of galvanism and other scientific discoveries in the early part of the 19th century and is about a very black use of science making it clearly science fiction. Other films certainly cross-over including The Thing (1982) – as much horror as sci-fi as is Alien (1979) whereas Aliens (1986) is part sci-fi, part horror and a very big part action film. What Booker has done in the dictionary is break sci-fi down into other sub-genres such as the following: Monster Movies, Dystopian, Utopian, Underwater Adventure, Cyberpunk, Post-Apocalyptic and so on. Setting some films into these sub-sets work well in delineating science-fiction and undoubtedly this list can be extended further. Much of the book is given over to many sub sections such as characters or subjects from the Star Wars, Star Trek (TV and film) and Alien films giving the impression that the book is at times padding its content out, although the section on time travel does not even mention Doctor Who as a TV series or the cult films from the 1960s starring Peter Cushing as the Doctor.

The layout of the book follows a familiar formula beginning with an extensive chronology which takes in Mary Shelley’s novel ‘Frankenstein’ as its starting point, followed by the writings of H.G. Wells before going onto cinema’s early innovators such as George Mélèis and the first truly inventive and stylish science-fiction film, Fritz Lang’s Metropolis (1927) and going onto mention some of the key points in the development of the science-fiction film. This is then followed by a 20 page essay exploring the development of science-fiction taking the book right up to 2009 and such films as Avatar. Of course books that follow such consistent genres as this find that science-fiction is continuing to develop further with all the Starship Trooper style of post-apocalyptic alien invasion films that have flooded the market post Cloverfield such as Monsters and Battle: Los Angeles as well as the much anticipated new Star Wars film due out at the end of next year.

In some parts of the book the author asserts a very American view of Bush and immigration policy with his discussion on Children of Men (2006) in which he clearly states that the film (despite being clearly set in Britain) is all about the Patriot Act in keeping immigrant borders tight especially with the porous Mexican border. This analogy would have worked much better in discussing The Day After Tomorrow (2004) where Americans are streaming across the Rio Grande to get into Mexico without understanding the immigration problems in the UK. Having said this it is a fairly concise encyclopaedia in which the sub-chapters on the individual subjects working well and adding fresh insight to the science fiction film.