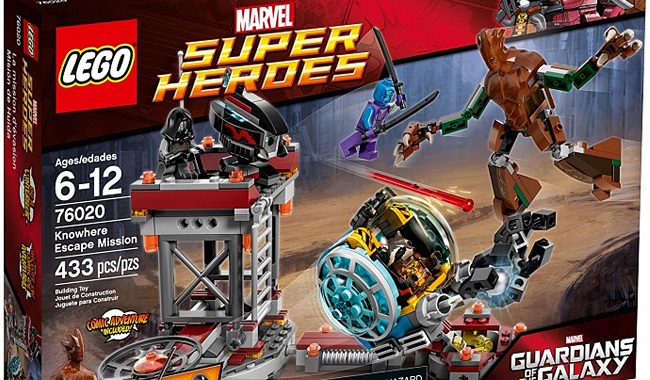 Lego Guardians of the Galaxy/X-Men comic

Guardians of the Galaxy is the latest Marvel comic franchise to receive the movie treatment this summer. While the Guardians exist in the same Marvel universe as the more well known Avengers, Spider Man or the X-Men for example, this group of superheroes mainly have their adventures in space (although there are many overlapping storylines).

As per Lego’s licence with Disney, Marvel’s owner, three new Lego sets have been released to coincide with the movie release. The Knowhere Escape Mission is the middle sized set of the three and offers a nice mix of minifigures and a decent play set for the action to happen.

The minifigures included are Rocket Raccoon, the humanoid genetically and cybernetically enhanced raccoon who is a member of the Guardians. The figure is very nicely done with the nowadays typically well moulded and printed head and including a tail piece which attaches between the short legs and the body.

Rocket’s partner-in-crime and a fellow member of the Guardians Groot is not really a minifigure but a brick built tree-like giant reminiscent of the Ents in Lord of the Rings. The figure is also similar in construction to the Ent that came with the Tower of Orthanc (10237) set although much smaller at about 5 inches tall and includes a moulded chest/head piece to give a good likeness to the character.

Nebula is a cybernetically enhanced super villainess who wields two swords. The cybernetics have been nicely modelled with the printed face as well as a silver arm piece depicting the replaced left arm.

Finally we have a Sakaaran soldier who has a cool Predator-esque face print and a hood giving him a dark mysterious look. The Sakaaran also has a new nice looking laser weapon.

The set itself has three parts. The first is Rocket Raccoon’s small round pod like space ship. The ship reminds me of deep sea diving submarines with its mechanised arms and the blue colour. The ship is small and compact and therefore ideal for playing with very little to break off in intense battles. It also has nice azure blue bricks and plates that might appeal to some collectors.

The second is a smallish free standing laser cannon. The design is nice and futuristic and includes a seemingly new spring loaded shooting mechanism as well as two new long, translucent red ammo pieces. The mechanism is very effective and can shoot the ammo easily across a room. However, the ammo piece is still very light, so there seems little risk of injury from it. At least not much more than from the old style flick-fire missiles. If anything, the effectiveness of the spring is more likely to cause the unique ammo pieces to get lost quicker thereby rendering the mechanism useless as it won’t fire any other type of piece.

The final and largest section is some sort of space station, possibly a mining or an industrial construction. The station is made of five smaller sections all mainly in dark red and gray which interlock with technic pins and make the build easy to manage. The main tower has a trapdoor mechanism above  what looks like a lava pit made of translucent yellow plates. The tower can also be made to fall over by pressing down on the satellite dish next to it. At the other end we have another fire pit this time with a catapult and some loose ammo.

The build is pretty simple as expected from this age group and can be completed in an hour without too many problems.

The completed Knowhere Escape Mission set is a nice play set with enough pieces to occupy little builders for a while. It is not clear whether the set depicts any scene from the coming film but the characters are certainly part of it, and I would  be certain that any fans of the film or comic would like to have at least Rocket Raccoon and Groot as part of their games or collections. The minifigures are, as usual nowadays, very good quality and in this case offer something different and fun even to those not aware of the film or comic.

The build contains some rarer colour pieces which some adult builders will appreciate. However, the end result is not really exciting enough for display. In play the set will shine. The modularity of the set makes it easy to add new sections to the extra pin locations included on all sides. The new design flick-fire gun and the usual trapdoor and breaking mechanisms add enough dynamics to the set to lend itself to some exciting space themed Lego play.

Although the franchise is not as big as the Spider Man, Iron Man or Captain America, it does feel like this theme could do well for Lego. Space has been a long time favourite Lego theme and irrespective of the movie licence, this set certainly adds different, fun characters to that world. It remains to be seen if the movie will do well and therefore push the Guardians of the Galaxy sets to popularity, but this set at least is worthy of giving it another look.