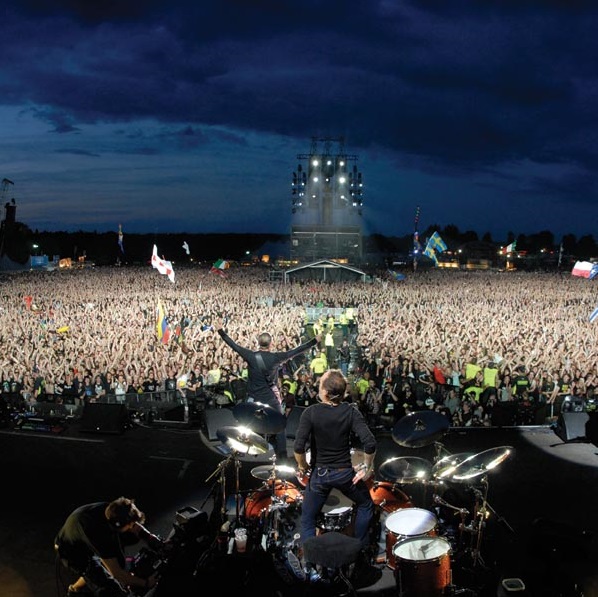 Battered, beaten and sun burnt, we arise to the final day of the Sonisphere festival with sleep in our eyes and a thirst for more carnage on the Apollo and Saturn stages. With the headliners Metallica looming even closer to finish the festival in style, we take a look at who gets to entertain the masses on the final stretch of one of the greatest UK festivals.

Enter French metal heads Gojira who get the opportunity to clear the cobwebs and attack the hangovers of the Sonisphere crowd from the Apollo stage.

Wasting no time in starting to set the bar for the day, Gojira rage through there set which included The Axe, Backbone and Toxic Garbage Island.

Continuing where Gojira left off, Protest the Hero continued to whip the growing crowd into frenzy with Bone marrow, Hair trigger and sextapes from their studio albums Scurrilous and Fortress.

Next up on the adjacent stage, was the turn of veteran crowd pleaser Devin Townsend Project. With his individual melodic sound, Devin entertained with songs spanning his 5 year career with the project.

Whilst Karnivool were doing their thing the real treat for the day was being constructed on the Apollo stage. As any Sonisphere goer will know or just fans of the aussie band Airbourne will be aware of, if the bar for the day’s proceedings  have been set, these guys were about to smash it to pieces!

With beer in their veins and rock n roll in their hearts, Airbourne thunder through their back catalogue and bring the crowd to their knees as they smash out the likes of too much, too young, cheap wine and woman in black. Each one knocking the other out of the park. With the front man’s antics leading him to climb the structure of the stage (again!) and play a solo high above the crowds of Knebworth, it was clear that these guys were going to take some beating!

Unfortunately it was clear that Airbourne really are a tough act to follow as Reel Big Fish clearly weren’t the band to challenge the Aussie’s as they took to the stage with their ska/punk music which did get the crowds moving, but failed to leave any kind of lasting impression. As did their Irish beer song  Saturn stage counterparts the Dropkick Murphy’s which might have instigated more drinking for the Sonisphere crowd but didn’t really quite live up to the expectations of the day.

Mastodon however delivered. With the day building up to its almighty metal crescendo, Mastodon thrilled the audience with the amazing guitar riffs, pounding bass and a healthy mixture of clean and growling vocals. With a set that included Oblivion, Blasteroid and High Road, the mighty Americans once again brought metal to the masses!

Now we start getting to the big boys leading the pack with Alice in Chains being 2nd on the bill on the Apollo stage. Mixing old songs with new the band didn’t miss a beat in effortlessly delivering g an astounding performance with Would?, Them Bones, Dam That River and Rooster. I could go on with listing the songs that span their incredible career, but just trust me when I say they done every song they played justice and gave a set they could be well and truly proud of. With the audience singing back each verse word for word it’s safe to say I’m not alone in thinking this.

Headlining the Saturn stage in what would be its final performance for the festival, Dream Theatre bring their progressive metal/rock to the Knebworth crowd. With their enchanting sound and amazing guitar work, Dream Theatre wooed the massive sea of people with works that span their 30 year career which included Pull me under, along for the ride and the enemy inside. Dream Theater fired out a spotless performance. If you’re a fan of the music but haven’t yet had the pleasure of catching them live, I urge you to do so. They are a live band who unlike some, sound so much better than there studio recordings.

Then the moment that everybody had been waiting for all weekend finally came. The mighty Metallica take to the stage in what is to be the grand finale for Sonisphere UK 2014. Not only had Sonisphere managed to secure the biggest rock band on the planet (my opinion) but they had also got them on their by request tour. So the set list (all bar 2 songs) was entirely chosen by the crowd that had come to see them. Awesome idea I hear you say! Yes it is, but I get the feeling that the set list wouldn’t have differed greatly if the band had picked the songs themselves. This is by no means a grumble, but it just concretes the fact that what Metallica have been playing for years are still what every Metallica fan wants to hear! I’m not going to go into how well they played, or how entertaining the set was which included a laser show, Metallica balls and a huge stage presence because…. It’s Metallica! Of course all those things were present. Can anybody do it better? No!

Also included in the set was the new song Lords of Summer, which was an instant hit with the crowd and I’m sure will be an addition to the live line up for many years to come!

And then that was that, Sonisphere was over for another year. If 2014 is anything to go by, I hope for damn sure that they don’t leave it another 2 years before coming back! Sonisphere 2015 WE NEED YOU!!!!!