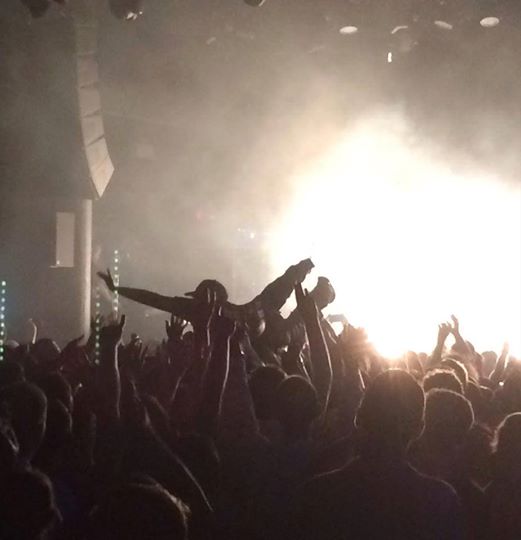 This is a bold statement, but I’m going to throw it out there. Based on one visit, I think Brooklyn Bowl is my new favourite venue. It’s so bloody odd with restaurant, bar, bowling alley and venue all rolled into one but I think that’s why I like it so much.

Despite falling in love a bit with the venue I walked away from there the other night with a little bit of sadness in my step. The brilliant night I’d just had had been Dan Le Sac Vs. Scroobius Pip’s last non-festival show together for the foreseeable future. Part of me wishes it had been a bit rubbish really so that I wouldn’t miss them quite so much.

Bursting onto the stage to roars of appreciation the boys kicked off in massive style with The Beat That My Heart Skipped. What a way to start a show. Having seen them relatively recently at their Koko show earlier this year (along with at least half the crowd there) I was a bit apprehensive that this small bowling alley couldn’t live up to my memory if they did exactly the same show. They were one step ahead of me though and vowed that they had changed things up a bit.

Le Sac seemed to be in an exceptionally upbeat mood and was considerably chattier on stage than when I’d seen them previously and Pip’s dressing up for Angles was a welcome re-addition to their set that I hadn’t seen since I saw them at a library show years ago.

Finishing the precisely one hour long set with Thou Shalt Always Kill certainly wasn’t enough for the fans gathered and a short encore of Introdiction and A Letter From God To Man was all we were offered by the duo. Well, apart from a tiny Dan Le Sac set, reminding us all what a bloody brilliant DJ he really is.

The night was finished with the most spectacular stage dive by DLS followed by him crowd surfing all the way to the back of the room. I have to admit; it was a pretty impressive sight and a brilliant way to end an incredible evening but did nothing to quell that little sad stone sitting at the bottom of my stomach.