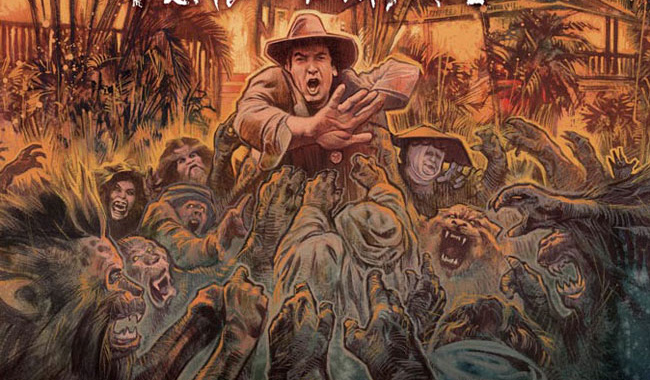 After a very ropey day 3 – but determined to get through a solid day full of classic entertainment, as well as that film that just stands out from the rest as a classic of modern horror cinema. The quest continued with day 4 and the next set of movies.

The cinema in screen 5 probably experienced its most empty day as those out drinking the night before had ran out of energy and needed the extra sleep so skipped the first movie.  Some skipped the last movie today in order to make it to the next day. But most people disappeared into the Discovery screens. The main call was that it was documentary day in the Disco screens with 3 full on documentaries on show.  More on those later – but for now the Main screen!

The day thankfully started on a high with Faults. Leland Orser (Who also appeared in The Guest) plays a cult expert hired to help out an elderly couple whose daughter has one missing – thanks to the fact that she has joined a new cult. Ansel (Orser) stages an intervention and locks up the daughter, Claire (Mary Elizabeth Winstead) in order to start deprogramming her.

Of course it wouldn’t be any fun if Claire didn’t have a few tricks up her sleeve, and Ansel himself suffered from a few personal issues of his own and the film beautifully exposes all of this.

Praise to both the leads for handling their roles with aplomb. This is a good example of what FrightFest does get right. Selecting films that bend genres and delivers a narrative that you just haven’t seen before.

This French horror starts off well enough, but quickly descends into stalk and kill of screen antics.  There is nothing more frustrating that off screen kills in horror films that like to show off the schlock in other areas.

Of course, some of the kills include small children, but if you aren’t willing to go there then why bother in the first place. The film dwindles further with a prolonged third act that makes little sense out of its character doing the killing. A missed opportunity from the makers of Livid.

Elijah Wood has been making a string of thrillers recently (quite what has happened to the fantastic Grand Piano is anyone’s guess). And he is no stranger to FrightFest having starred in the remake of Maniac.

Here, like with The Den it’s all footage from the perspective of laptops and cameras as Wood plays Nick, a supposed winner of a competition – the prize being dinner with starlet Jill Goddard (Sasha Grey). But it turns out to be a Hoax and Nick finds himself first lured in, and then under the command of a mysterious caller.

This one is just plain daft and might have a few people having a good giggle at its expense. But for the most part the actors are playing it straight and sell the premise well enough.

Musical horror returns! After an opening which sees the murder of a stage diva (Minnie Driver) we cut to a decade later where a summer camp ran by Meat Loaf for up and coming musical stars are set to put on the same production (The Haunting Of The Opera). Upon hearing this – the daughter of the murdered Diva (who happens to be working in the kitchen) decides this is her chance to shine and gets into auditions. But then people start getting offed and all starts to turn a bit sticky!

Songs and comedy ensue as the film really takes the piss out of the situation as well as horror films that have had similar premises.

It toys around with it well enough, and even delivers a few numbers that are worthy. The singing talent deliver, and the killers persepective that goes all rock and sweary is hilarious. but it’s all a bit predictable (We suspect it’s meant to be). One for the movie night in with friends for sure.

Alarm bells went off when we heard that this was from the maker of The Pact – a film we were not kind to in recent memory. Home is an improvement on that – but interestingly features similar wire work from that film’s stunts.

Home stands out for the fact that it’s narrative features various lead perspectives. It fails though in that it leaves the viewer having to restart with the introduction of each new lead. This isn’t quite a segmental horror movie – but it is clearly made of three part. But the writing isn’t strong enough here to make it fully work – even if there are a couple of good jumps.

Drew: The Man Behind The Poster

This is story of film poster artist Drew Struzan. Blade Runner, Big Trouble in Little China, Back to the Future Trilogy, Indiana jones movies, Harry Potter, Star Wars special editions (and episodes 1-III) – You are familiar with his work!

A couple of books were released on Struzan a few years back (the smaller of which makes an appearance in this doc). But it’s a great story behind a man who had it rough, found love, found work, had it rough again but ultimately came out on top and has managed to find further peace in life by simply doing what he wants to do – and continues to do – make art! Highly recommended.

Doc Of The Dead

There is no shortage of zombie documentaries out there. This one seeks to trace the beginnings of the horror sub-genre. Right back through history with voodoo origins, and even into early twentieth century cinema before it all changed in the late 60’s with Romero’s original classic.

Sure the take on the “Zombie” has been modified, refined and then redefined through time. But the other aching question is “why the fascination” It seems the scholars and film-makers themselves are so perplexed by the fascination people have (We even get to see a mystified Bruce Campbell talk about a time he married a couple who dressed as Zombies – as did the entire wedding party!).

It’s a good look at beginnings of the genre – but time is skipped over all too quickly from the original Dawn of the Dead until the present. So much material is left not talked about, instead we race to the whole issue about fast zombies instead in modern cinema. A shame as there is probably a good 3 hour documentary aching to break free from the ground. But this 90 minute feature isn’t going to offend anyone. It just won’t enlighten those in the know – but it will entertain them!

One of the most well-known failures of 1990’s cinema, the catastrophic twists and turns that bestowed themself upon the making of The Island Of Dr. Moreau are almost the stuff of legend – and here they are contextualised by the very crew that worked on the film from what it was and what it went on to become.

There are certainly key players missing (Val Kilmer, Michael De Luca, David Thewlis) from here that were approached but declined to participate – but Director David Gregory has plenty of material here to play with in terms of pre-production materials and the available cast and crew that did come forth – including Richard Stanley. This was the clear winner of Day 4’s movie choices!

House At The End Of Time

This foreign thriller tells the tale of a woman sent to serve time for murder only to return to ma home that is now haunted. Haunted, but also offering a doorway to the past.

It’s a film that loops its narrative – but at a certain point viewers will be able to tell where it is going. But it is not able to get past the horrid “old Age” make up – it puts Chinese ghost story movies (where they put embarrassing white wigs and eyebrows on thirty something year old men in a vein effort to convey that they are old).

An oddity, but not as strong as perhaps it hopes to be.

So the main screen like Day 3 started strong but wimped out in the end. The lack of actual horror films not helping matters. Today essentially was the day for the documentary!

Go here for the look at the final day!