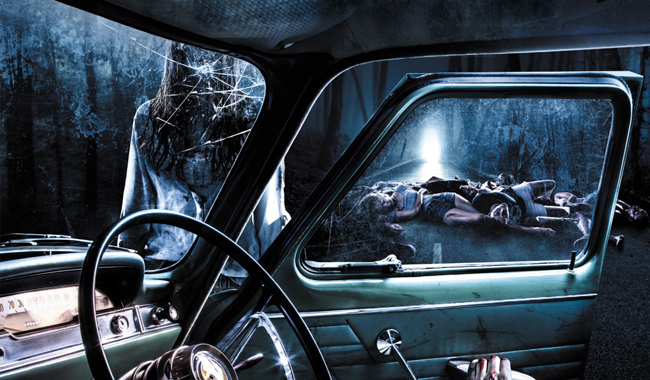 With a very lacking main screen performance of Day 4 we look now to Day 5 in the hope that there is still something that will stand out to audiences. So here it is. the final look. And at the bottom of this post we will list out best films of the festival.

Well sadly most of the hunting and killing seems to be done by a creepy fisherman with a hook under the Nymph’s spell. Hell they even make a “I Know What You Did Last Summer” joke at his expense. The mermaid action is sadly minimal – and like some of the most annoying horror films of recent times (Hello Among the Living) – Off Screen!

But if you like pretty people getting chased around ruins with lots of pretty locations, and well, did we mention the pretty people? then there are worse films to see at the festival – but not many!

A couple go in search of a panther out in the wild in the hopes of capturing it on camera. But the man helping them out instead seems to have a crack addict with him who was assaulted in the area and suddenly the film becomes about that – and then all the other bodies they find and a mysterious killer in the area.

Xmoor has spent so much time constructing its flimsy narrative that by the time night has fallen and the characters are trapped in a danger zone having agreed to instead film and trap a killer that there is little runtime left for much to happen. And even in that time people seem to spend far too much of that time turning on each other and running in the wrong directions?

A confused narrative for sure and one that turned the crowd cold after the already bad start to the day.

Divided up into parts this psychological thriller is of the hardcore 18 rated variety if you are interested in sex and limb loping. We find a serial-dater ceremoniously dating and conning women he meets until he is caught in the act by his latest catch. The two form an uneasy relationship where they pretend to be siblings and they con money out of women. But being a psychological drama at heart about a man obsessed with women, and his new girlfriend who is threatened by every other woman that he goes near – it’s only a matter of time before tempers flare and blood flows.

Patience will run thin on this one as it moves at a slow pace and doesn’t offer enough variety between the segments. we are literally watching the sad and slow decline of two people who are obsessed. One with sex, the other with her partner. Each segment of the film (named after the next women prayed on) ends in predictable fashion which makes the film all in all just a bit of a freakshow study for viewers. There isn’t much depth beyond saying the story is about a couple of sex obsessed weirdos who end up becoming violent.

No one was expecting much from this third V/H/S movie – but it seems that it is the highlight of the main screen! And that most certainly is damning with faint praise.

The segments we get are a varied bunch as usual. One of them about skateboarders is particularly enjoyable despite you hoping for the death of the main characters and it ending very abruptly. Ut at least it was silly fun. There may be life in the franchise yet!

A competent sci-fi thriller that boggles the mind. Not because of its extra-terrestrial story – but because of its place at the festival. Questions like – Why is this the closing film? It reay isn’t that good?  It didn’t even get any representation on site. It also didn’t get announced at the same time as the opening film. Often these films are announced together. We can only assume it hadn’t been picked and is acting as a late replacement. But it’s so mediocre that it’s odd that they did not all chose another film to close the festival. Even if the film had not been chosen as the closing film it still raises the question of why it is here at all?

A poor choice for closing film (And that is saying something after the likes of A Lonely Place to Die, The Last Exorcism and Tower Block – all of which were mediocre closing films. But at least they turned up to the right festival).

A man lets himself into suburban home and interrupts the couple living there – taking them both hostage. He proceeds to humiliate and torture the man whilst trying his best to play house with the woman.

This is a psychological thriller from director Ate De Jong (perhaps more well known for his work two decades ago including Drop Dead Fred and Highway To Hell). This work could not be more different.

The film becomes much more of a drama as it proceeds with empowerment games being player between the characters. There is less and less threat however of actual physical violence though. But the twists towards the end are enough to sustain interest.

Sadie Frost gets to put in the world’s most pointless cameo ever at the films tail end.

A fairly effective Aussie chiller about  a, er, haunted road. Yes give us some pretty teens, Make then take part in a stupid urban legend game and then let them get offed ne at a time.

The cast and crew do an effective enough job with this one. Its harmless, but then perhaps that’s the problem. Expect deliver on disc in the near future we suspect.

Another Werewolf piece this year. It’s always a welcome change to have a werewolf film on the bill – but not when they are this poorly put together! The cast, the locations, and in particular the monster designs are so poor in this film it’s a wonder how it made it onto the FrightFest slate in the first place. But then there are indeed worse movies – but this one slips in the bottom 5fivewith ease.

Truth or Dare looks good on paper – but the film is very cheap, features some forced acting and some major logic issues with the characters.

So a group of TV celebrities who run a show called Truth or Dare full of fake antics are taken hostage by a fan/maniac who forced them to play an actual game of truth or dare. Tell a lie and you get hurt. Select Dare and well – the results could also be bloody.

The script is one of the poorest at this year’s festival only because it had such an engaging premise to start with. It won’t be long before you are screaming at characters for their dafty choices that you know in real life they would not pick.
Example: Everyone starts by selecting Truth and when they lie they get hurt by their captor. The only time he doesn’t hurt them is when they admit the truth. So you’d think the game would be a little easier to play under those circumstances? Just tell the truth even if it is humiliating.
Want more evidence? – the first person who picks Dare gets the pleasure of eating broken glass. Despite this people still pick Dare as an option?

Why? – well so that Writer, Director Star Jessica Cameron has a movie left to tel; and blood to spill.

If it wasn’t for such a nihilistic ending, we’d accuse the writer/director/Star of using this as a show piece for her own character (who it appears is the dudley-doo-right of the team who barely gets blood spilt on them). But for all of its faults it is still worth a good chuckle with friends – if only to howl at the screen when characters make above mentioned dumb choices.

Another sci-fi anomaly that has shown up that will be in disc soon. So we have a giant ET disc in the sky and a small group of people find themselves stucvk indoors with no plan but to turn against each pther. This is thanks to our female lead cheating on her current boyfriend with a random stranger. And she also has a neighbour who has the hots for her too. So comedy ensues when the four look for ways to out the others as threats.

Sadly it runs out of steam long before the halfway mark and any developments in the second half are met with yawns.

It is just a shock then that the weakest of the days was the last day with not one film being worthy of strong recommendation. We understand that some choices of poor film are deliberate – but with the crowd split up the “laugh in unison” effect was largely missing.

We also appreciate that some distributors like to play politics with the film bookings and the times they are shown. This is sadly part of the parcel when delivering a festival. We ca only dream of a time when all four directors are free to programme exactly what they want and position them exactly where they deem fit.

We also appreciate that all four directors each have their own tatse in film and work hard round the year to make it work. But they in turn must appreciate that not every year is going to work as strongly as others.  Two years back the crowd left with a foul taste in their mouths that’s to the content being a bit over saturated with rape movies. Last year there were few films that stoof out as five star experiences and everything else was of the 2-3 star variety.

This year the over-all quality has improved slightly to the 2-4 star variety. But there was not one film that stood out string above the crowd as an instant classic. There was no 5 star movies at all.

And the more people say about the choice of closing film then perhaps the clearer they will here us. On inspection it was clear that one of the festival managers hated the film. So democracy rules on this occasion by vote. But for a closing film you’d think they would have picked one that all of them liked, and that they were not being wrangled by distributors about.

A sad day to go out on – but the memories of the stronger films of the weekend will stay with us. This year was a big gamble and after the dust has settled it was to some degree still a success. They certainly haven’t scared off people from attending next year. But something else needs to change. A stronger fight for what goes into the Disco screens and the Main screens needs to be fought. Or at least give audiences the chance to buy a Discovery Screen weekend pass. That and it would be nice if they limited the amount of tickets people could buy on sleep queue day to 4. It’s frustrating to turn up in person for something you wait all year for to land in a spot in the cinema you’d prefer not to be ij – all thanks to a select few who turn up a few hours before you at the queue and buy stupid amounts of tickets for their friends hogging the front rows and the isle seats.

We do hold out hope that the festival will continue to mould itself. There is no imminent threat at the moment of any other horror film festival trying to step into their boots – and to be honest we generally like the team that is in place here – from the top to the bottom it’s still a fairly approachable crowd. It’s just been a bit of an off year.

So the top 10 movies of FrightFest for us looks like this:

Digging Up The Marrow

Drew: The Man Behind The Poster