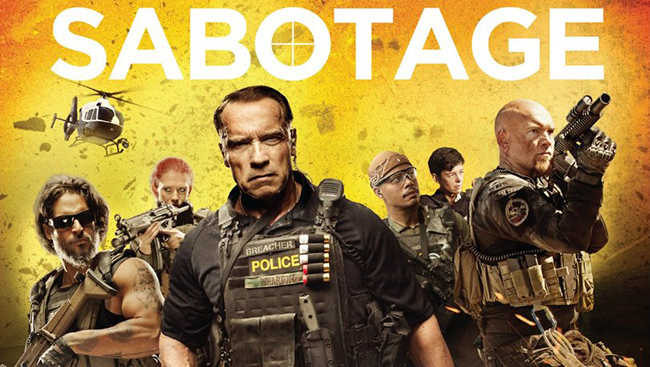 The Schwarzenegger rejuvenation continues. Arnold hasn’t fared too well of late with phoned in appearances in The Last Stand and The Expendables series not leaving audiences for much appetite for the Austrian Oak.

Teaming with Writer/Director David Ayer seems like the right recipe needed for new success – but instead we get a very muddled thriller that will both tease and annoy the hardcore fans.

Sabotage (which has had several titles to date Ten, Breacher… before settling on this rather boring title) finds Arnold as the leader of an elite team of DEA agents – all of whom are about as functional as a pen of tattooed convicts. Never has there been such a dysfunctional untrustworthy, foul mouthed, law breaking team of idiots in cinema history since Reservoir Dogs. And it seems they live up to their reputation by stealing a fortune on a drug bust at the start of the film. But after they have stashed their cash someone pinches it from under them.

With no idea of who or why – suddenly members of the team start to get killed off one at a time. Breacher sets about with investigator Caroline Brentwood (Olivia Williams) to get to the bottom of it all – whilst trying to hold his team together.

It’s a real rollercoaster of boredom and intense shoot-outs throughout never finding a true temp to tick along by. And worst of all Schwarzenegger’s performance leaps up and down from some of worst to some of his best delivery – but usually it’s all pretty terrible.

The ultra-violence and action on show is something that helps sell the film and a slightly confused climax actually raises the bar slightly. There, however, is an end coda that all but pisses over the rest of the film. By this we mean it’s almost like a 5 minute mini-movie of what we actually want from Arnold these days. So at least he gets to go out on a high note in an otherwise very misjudged movie that will leave a venomous taste in your mouth.