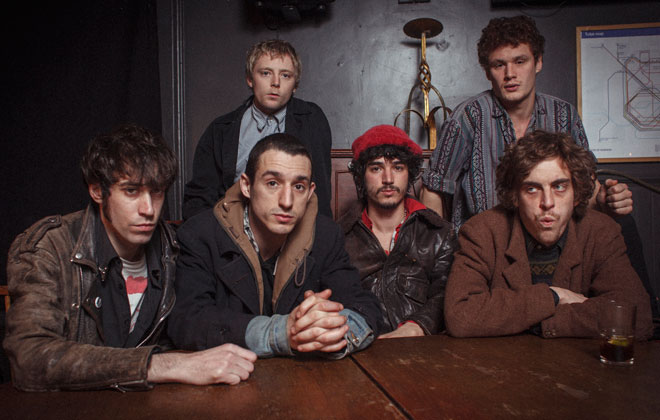 It’s Freshers’ Week at Glasgow Art School, with another intake of bright young things seeking artistic fame and fortune. Since the Art School has reputation for the avant garde and transgressive, who better to corrupt the youth than Fat White Family?

The Fat Whites have been kicking up a storm over the last nine months or so, their incendiary live shows bringing a much-needed jolt of adrenaline back to British guitar music. Anticipation is so high that it seems members of just about every band in Glasgow are here; I watch the gig sandwiched between Franz Ferdinand and Casual Sex.

They take to the stage, and announce “We are Auto Neutron”, the first track from album “Champagne Holocaust”. The biggest surprise in the whole set may be that there are no surprises. The band, having taken to the stage, stay on the stage; no stage diving or crowd surfing. Alex Kapranos, who’s seen the chaotic London gigs, says to me at one point, “I’ve never seen him (lead singer Lias Saoudi) keep his trousers on for so long”, and, indeed, they stay on.

With the filth and fury missing, what’s left? The sound of a real band, playing at the height of their powers, that’s what. The ominous chords of “Wet Hot Beef” are as menacing as ever; and when Lias intones “I Am Mark E Smith”, he’s still more impassioned than the Fall frontman ever could be bothered to muster.

Have the Fat White Family been this century’s Jesus and Mary Chain, making a mark with anarchic early gigs to settle down into becoming a relatively conventional, if very good rock n’roll band? Or is Lias just looking after himself for an upcoming tonsillectomy? Whichever, it’s been a hell of a ride so far.