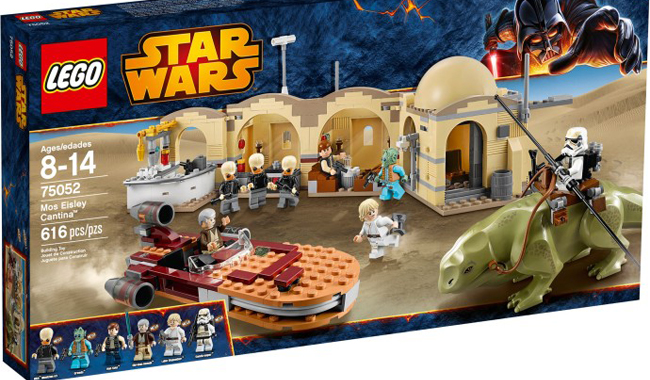 The Mos Eisley Cantina has for a long time been one of the most requested Lego Star Wars sets among the fans. The scenes of Luke Skywalker experiencing the Mos Eisley Spaceport are where the viewers  are introduced to the wider world of Star Wars. Here we get to see the force being meaningfully used and explained by Obi Wan Kenobi for the first time. Of course, here we also get the see the infamous introduction to Han Solo, when he sits down for a conversation with Greedo who  ends up being shot in either cold blood or in self defence depending on the version you are watching. Then there is that music by the Bith band. Somehow the “Cantina Band” song playing in the background to these scenes has become as memorable as the main themes of Star Wars.

No wonder then that the scene is so loved and Lego fans have been eager to get their hands in a good version to settle once and for all who shot first!  The Mos Eisley Cantina has been released before by Lego in set 4501 in 2004. However, that set only had 193 pieces and therefore did not contain much more than the booth for Han and Greedo to sit in to set the scene.

For 2014, the piece count has been more than tripled. We still get the same extras of a Stormtrooper on a dewback mount and Luke’s landspeeder, but the cantina itself now also has the bar area, the sliding door entrance area and a second booth for the band.

The Han Solo minifigure is the same as in the Microfighters series Millennium Falcon and the Luke Skywalker is the same as in the 2014 UCS Sandcrawler (75059) set, but all the other figures are unique to the set. The ‘sand-trooper’ is very similar to the previous versions released with some dirt and sand printed all over the usual stormtrooper suit and a fabric shoulder guard. However, this is a good thing as these have always looked excellent.

Obi Wan of course has been released in numerous similar versions before. This new version has added leg printing to better represent his long robes. The Bith musicians on the other hand are the first ever representation of this famous band. Their torso is very subtly printed but otherwise the figures are very plain in black torso and gray legs aside from the very nicely moulded heads.

Even with these one of a kind minifigures, the star of the show is still Greedo. Greedo has not been seen in a minifigure form since the original cantina set which makes sense seeing as this is the only scene we ever meet the bounty hunter. As usual, Lego has done a great job on this figure. The head moulding and painting is superb and we get torso and leg printing too.

The final mention must go to the Dewback animal figure. This giant lizard can be seen in all the versions of the film, but is probably more memorable from the later enhanced editions where we can see the stormtroopers riding them in the desert. The Dewback is made up of a solid body and tail with a moveable jaw which can be displayed either as wild or with a saddle and reigns for riding.

The first part of the build is Luke’s landspeeder.  The landspeeder has been released numerous times and the build has always been pretty much the same. In fact, the design seems to be exactly the same as the previous ‘Luke’s Landspeeder’ (8092) from 2010 aside from two panels, the left side engine and the colour.  The colour is now orange rather than the sand brown and pink colours in the past. The colour is probably the closest so far, though still not right as the real speeder colour is somewhere in between all three. The open engine sections are now represented by stickers. While generally I am against stickers in Lego, these actually look pretty good on the finished model and better than the brick built broken engine in the previous version.

The cantina design itself is simple but very clever in its execution. The bar and the door sections are hinged in such a way that the whole set can angled in different ways to create the bar area, or be closed altogether to a much smaller space for storage. The two booths can also be brought out from under the arches by a push mechanism at the back giving easy access to either play out the scenes or to pose the figures in desired manner.

The bar section in particular is very nicely designed with gold trimmed drinks dispenser and various drinks on the bar.

The build is pretty simple with the only difficult parts represented by the tube sections making up the bar railing and the surrounds on the land speeder. So the build is not large enough or complicated enough to excite by itself, yet the resulting structure is very nice particularly considering the brick count lost on the landspeeder.

The Mos Eisley Cantina occupies the middle ground of the new season sets between the smaller Snowspeeder and B-Wing and the larger AT-AT and Imperial Star Destroyer. The set really hits a sweet spot in coming up with a relatively inexpensive set that still appeals to adult fans, collectors and children. The set has plenty of playability, particularly with the Dewback and the speeder and the cantina itself can act as a backdrop to all kinds of play sessions.

For adults, Greedo and the Bith band are probably the main draws. Greedo in particular seems to be the most memorable one-scene character in Star Wars and getting him for the first time in over a decade is great for any minifigure collector.

The dewback is very nice as well, particularly when you have the stormtrooper riding on him.  Overall therefore, despite the rather small size of the set, there are enough cool features to make this worthy of displaying. Throw in Chewbacca, C3-PO and R2-D2 which are figures most fans will have from before and you pretty much have the whole scene from the movies.

I guess it would have been nice for perhaps one of the Bith musicians to have been swapped for perhaps  the bartender, or swap two of them for the pair of criminals Luke and Obi Wan meet at the bar. You could also argue that the cantina could have been done with even more bricks, perhaps at the size of Jabba’s palace (9516) from 2012 for example, but then that set had fewer minifigures and I’m not sure if there really would have been much more to add to this set worthy of the inevitable cost increase.

All in all, the Mos Eisley Cantina has answered all but the most extreme requests of what fans wanted it to be. As mentioned, it really is a set that will appeal to everyone and therefore should be high on the Christmas lists in the next few months. So with this and the already announced UCS Slave I to be released in January, two of the three most requested sets are now once again out. So, can we have that Cloud City next year?