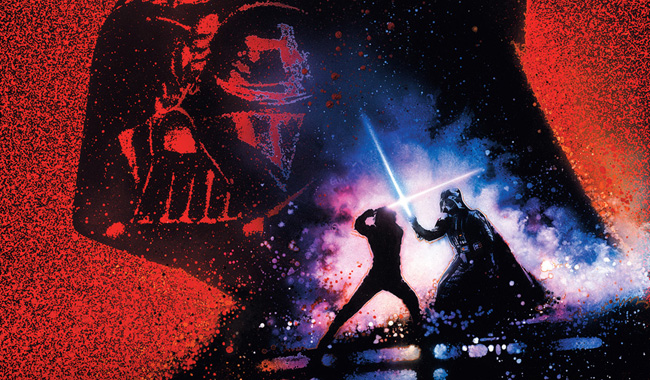 If ever any geek wanted the perfect coffee table book for their friends to admire – this is a no brainer of a buy from Abrams Books.

Drew Struzan, creator of many and most of the Star Wars posters we know and love provides the introduction to a universe that changed many a career for many an artist.

The 180 page book flows in chronological order of the films. Concept design work from Ralph McQuarrie are included, conceptual poster design work, sketch work and of course many (MANY!) finished products themselves.

Many of these will already be familiar to fans of the franchise, but there are also a few lesser seen works (see Howard Chaykin more oblique designs along with the more well-known design by Tom Jung for the original Star Wars as well as Tom Chantrell’s well-worn design).

It’s clear that not only did these posters like to see our heroes do battle, but how quickly the artists picked up on the iconography of Darth Vader’s visor as well as the Death Star.

John Berkley provided a much more artsy design to some posters. But it’s clear that these are indulgencies for the novelisation, rather than theatre poster designs. But few designs are more bizarre than Wojtek Siudmak’s take on the film. And then few get more gorgeous looking that Noriyoshi Ohrai’s ships design poster spread. We could name drop all day here, we really could. Each page presents a different angle with often shared themes by a new artist.

Roger Kastel’s dreamlike blur he gave his Empire Strikes Back poster is a strong contender – which is compared (rightly so) in the text to the Gone With the Wind theatrical poster infusing heavy romance instead of battles giving the franchise a much more epic sweep.

John Alvin, Tom Jung and of course Drew Struzan are pretty much the names most associated with the franchise. Jung did a lot of the early memorable and used theatrical poster work. Struzan – had his early attempts (Including the Revenge of the Jedi Vader and red design that adorns the front cover) but he is now often thought of as the artist responsible for the special editions as well as the prequel trilogy poster sets.

The prequel trilogy have less initial designs but the aftermath of the films has seen a slew of variations and interpretations of the entire saga by various artists. Some of them focus on the films themselves and deliver astounding poster designs that appropriate the artist’s style; Others have selected characters or themes to deliver theirs: Whether it is military recruitment posters, an art deco look, or family based romanticism. Even the Max Rebo band get their own disco looking poster!

Its an impressive collection and one that you know could and will continue to thrive.