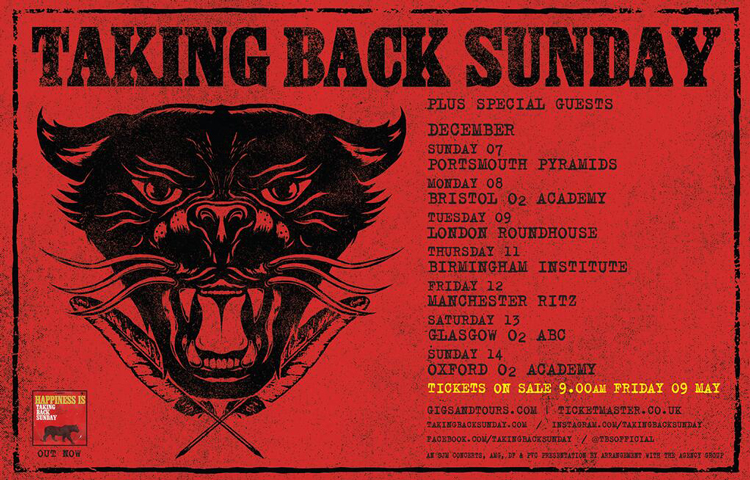 After the release of Happiness Is, Taking Back Sunday finally announced that they would be coming to the UK, and everyone knew what happiness was. The evening was kicked off by Blitz Kids, whose set saw them play the hits from their current release, The Good Youth, as well as a few others. ‘Perfect’ was one such track which got the crowd on their feet.

Next up were the weird and wonderful Marmozets, whose presence seemed to have surprised some of the crowd who were clearly unfamiliar with the group. But those who were revelled in their appearance. Becca and co. were on vital form, and made the most of their time on stage.

Much of the set was made up of tracks from their debut album, and you’ve never heard the songs sound better. ‘Why Do You Hate Me?’ and ‘Move, Shake, Hide’ were two contenders for songs of the night, while set closer ‘Vibetech’ saw Becca get in the crowd – and that got them going. A headline tour has just been announced for next year, get ready.

But the crowd came to see Taking Back Sunday, whose set was a mixture of the better tracks from Happiness Is and a back to back go through of the hits from the past 10 plus years. Adam Lazzara was on fine form on vocal duty, never missing a note, while the rest of TBS were just as good.

They opened their set with ‘Liar (It Takes One To Know One)’, and from there it got bigger. New tracks like ‘All The Way’ and, in particular, ‘Better Homes And Gardens’ were winners with the crowd, while the second anything from their seminal debut Tell All your Friends was played, the venue was upturned.

Opting away from the bullshit that is an encore, the band decided to stay on stage and entertain for as long as possible. And entertain they did. Everything from ‘Cute Without The E (Cut From The Team)’ to the rarely played ‘My Blue Heaven’ was everything the crowd wanted, as Taking Back Sunday delivered everything they could. And then came the huge set closer, ‘MakeDamnSure’, which may be the highlight of many an audience members year.

A memorable night which saw songs from many peoples memories take shape, Taking Back Sunday are as energetic and visceral on stage as they were at the start of their careers. They show no signs of slowing down, which is all the better for us. And that is what happiness is.