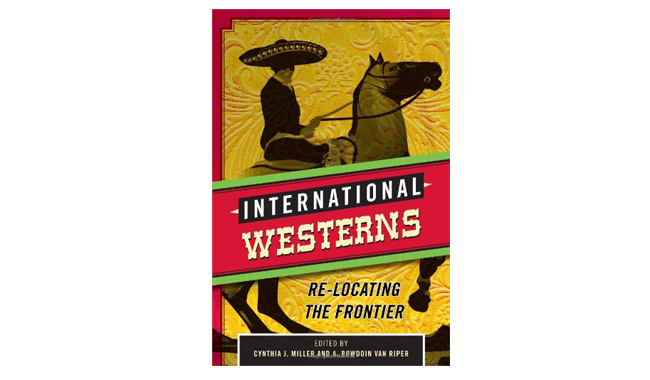 When we think of international westerns what comes to mind are the spaghetti westerns and for the lay person or casual movie viewer the so-called dollar trilogy starring Clint Eastwood or further still for most movie fans this can be expanded out to include the Django films or those with Klaus Kinski. The recent publication, ‘International Westerns: Relocating the Frontier’ published by Scarecrow Press and edited by Scarecrow publication regular Cynthia J. Miller and Bowdoin Van Riper turns that notion on its head. Through a collection of essays from different authors (including the editors) anything which could be considered a western comes from some very surprising corners of the world. Naturally there are some essays stretching the idea of what constitutes a western a little far. What is equally surprising is how little is mentioned of the Italian western, or the more commonly termed spaghetti western. Just a few pages are given over to the spaghetti and then the focus is on a couple of westerns by Sergio Sollima while the dollar films or other Sergio Leone films are merely mentioned in passing. Perhaps there is a touch of sniffiness here as Leone’s films and more recently Django (1966) and its followers have had much written about them whereas other national westerns have barely had a word written on them.

The book is split into five parts, each containing four separate chapters. It is worth listing here the national countries and the films from those countries that constitute westerns. It opens with two chapters on Kurdish and Turkish films that are considered westerns or are influenced which make good use of the vast Turkish desert plains. Already in the book the link is tenuous before it leads into one of three chapters on the German western. Now here is a country that has challenged the idea of the Hollywood western. Many authors and critics before, including Sergio Leone and writer Christopher Frayling have noted that without the German westerns of the early 1960s the spaghetti westerns may never have been made. The first of these chapters is about the DEFA studio western, or more coherently westerns which emerged from communist East Germany (DDR) in the early 1960s in which the good Indian fights the capitalist white frontiersman (non-native American). Another chapter is about the Winnetou films, a series of West German westerns which like their East German counterparts were filmed in the Istrian region of Yugoslavia (present day Croatia). These were above standard westerns sadly little seen in this country. The Winnetou films were based off the popular western novels by German writer Karl May. They usually starred former Tarzan Lex Barker as a trapper called Old Shatterhand with French actor Pierre Brice playing the Apache Indian Winnetou. This particular chapter focuses on a parody film made in 2001 called Manitou’s Shoe which was seen as disrespecting the Winnetou films and their legacy. Another chapter later in the book is about westerns seen through German eyes such as the Hollywood westerns by Fritz Lang, focussing mostly on his 1941 underrated western, Western Union about the challenges of setting up telegraph communications across the west. The chapter also focusses on another German national filmmaker little seen outside of Europe, Luis Trenker. He was also a filmmaker popular under the Third Reich, but little capital is made of that in this essay.

Elsewhere the book looks at the few Danish ‘potato’ comedy westerns made in the early 1970s (westerns made in Germany are sometimes called ‘sauerkraut’ westerns), a handful of British comedy westerns with the likes of Arthur Askey, the Crazy Gang and Carry on Cowboy (1966) which are distinctly about Brits out of their comfort zone in the wild west (or wild Yukon in two cases). What this surprising chapter fails to note is that the 1961 British western Savage Guns was made in Almeria, Spain before Sergio Leone went there for A Fistful of Dollars or the countless other British westerns of the early 1970s, themselves barely distinguishable from the spaghetti western. Another chapter on the British western is an essay on Michael Winterbottom’s The Claim (2000), an adaptation of Thomas Hardy’s ‘The Mayor of Casterbridge’ which transfers nicely to the Gold Rush. Equally at home in the West or that countries own variation of it is Australia. While this chapter focuses on films with Aboriginals as well as Kangaroo (1952) it misses out on other Australian westerns such as the Ned Kelly films, The Sundowners (1960) or The Man from Snowy River (1982). Elsewhere the chapter on the Irish western looks at the very Irish identity that permeates through John Ford’s films as well as more recent films made during the years of the successful booming Irish economy before the crash, the so-called years of the Celtic Tiger. For France the book looks at the classic and still in Europe very popular Lucky Luke character (although no films from France) and in Italy the strange disjointed chapter on the 19th century comic book characters created by Emilio Salgari who it is claimed was a big influence on Sergio’s Leone and Sollima; from Hungary there is a chapter called ‘They Sing Songs About Us Here’ which focuses on the Hajduk bandits of the great plains of Hungary in the 19th century. Again in communist Eastern Europe there are chapters devoted to the classic 1964 pre-Prague Spring Czech film, Lemonade Joe and the wonderful Soviet film White Sun of the Desert (1969) about a Soviet revolutionary soldier trying to free the wives from a harem of a despotic Turkmenistan sheikh on the Caspian Sea. The link to westerns is tenuous but just works in the context of the book. Equally tenuous is the Chinese Wong Kar-Wai wuxia film, Ashes of Time (1994) as are the Bollywood westerns from India. Staying in the East, this time Japan, Sukiyaki Western Django (2007) concludes the book nicely as a Postmodern western/Japanese set film playing with ideas and identities of East and West. Films nearer to home of the spiritual heartland of the Western are given a completely different approach, that of the films of Latin America. Nearer to the western genre, both geographically and politically films such as Alejandro Jodorowsky’s El Topo (1970) is a bizarre surreal journey through the badlands of Mexico but with a strong use of catholic symbolism and the result is as violent and strange as the Old Testament. The same can also be said of Brazilian westerns with such films as O Cangaceiro (1953) and Black God, White Devil (1964), again very violent films steeped in catholic mysticism and political agendas, far more than most Hollywood westerns which by comparison had much simpler morals to them.

The book is a revelation to anyone wanting to explore the westerns beyond the frontiers of the American/Hollywood interpretation. Most Hollywood westerns appeared to have been set in the 1870s in a country recovering from civil war but these aforementioned films from further afield broadens the horizons as well as the landscapes while also broadening a political agenda. It still feels a little disingenuous not to include a more focussed look at the Italian or so-called spaghetti western and is particularly noticeable and disappointing in the chapter on Italy. Never the less there is a very scholarly approached book with a few illustrations running throughout and a striking cover that at its centre tries to get to the heart of the ‘other’ westerns.