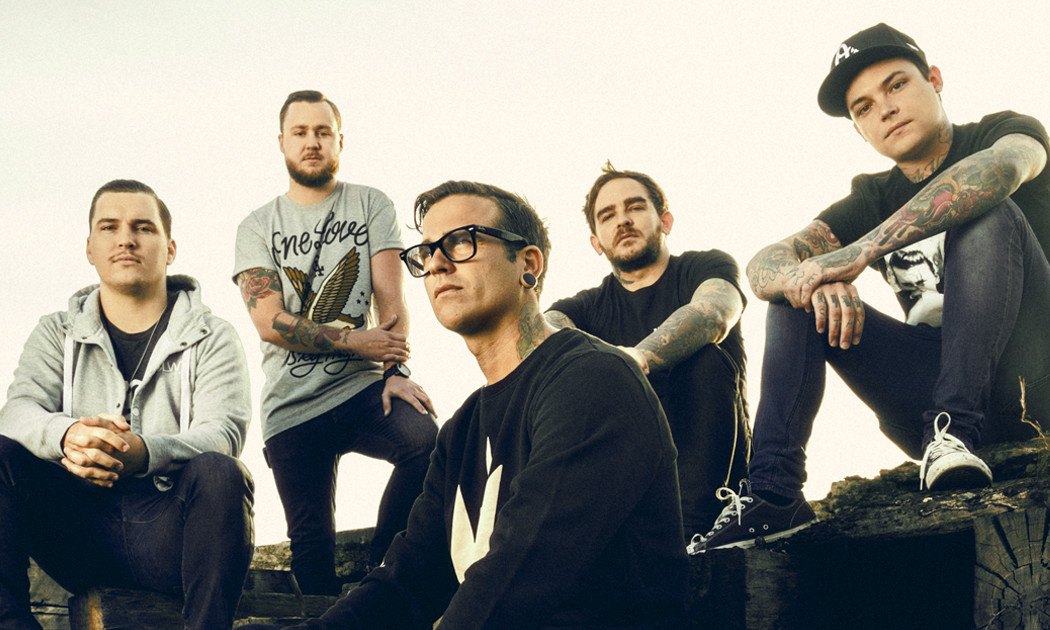 Australian melodic metalcore heavyweights The Amity Affliction have been a touring band for a while. 10 years and four records in, on their second UK headline tour, the band have finally gained some of the recognition they’ve deserved all along. We sent superfan Iqra Choudhry along to catch up with drummer Ryan Burt before their Manchester show to talk about their latest record and their sold out tour, all whilst trying not to fangirl too much….

First off, just because I’m curious – how painful was it to get stabbed in the eye?
(laughs) Funnily enough, it wasn’t that painful. It was just mentally scarring. Anything to do with the eye is horrible, but it’s over!

How would you describe your band and your sound to people who’ve never heard of you?
It’s hard to be original these days, but I feel like we do have something original – it’s screaming, mixed with melodic singing but we’re all about choruses though, we’re really big on catchy choruses. And being positive – it’ all about being happy, and living life.

I think this is your biggest UK tour to date?
Yeah, we’ve only done one other headline.

How’s it been so far?
It’s been great. We’ve only done two UK shows so far, the rest were in Europe, but it’s been insane, especially seeing as it’s only our second headline. Every show’s been close to sold out – every UK show has sold out, so that’s awesome. The response has been overwhelming.

You’ve got an American and an Australian leg after this, too – are you excited?
Yeah, it’ll be good – we’re doing a regional tour in Australia, like we haven’t done for years. We’re going into little towns we haven’t been to since like 2008. So, yeah – it’ll be fun.

You’ve been a band for about 10 years – is it nice start selling out shows here, and getting more recognition?
Yeah, it is – especially overseas. It’s taken a while!

What would be your dream tour? Any bands whatsoever?
My dream tour? It’s funny, because no other bands would be in the same genre. For me, it’d be an Australian band called Silverchair, I don’t think they’ve made it over here, they might have had a couple of singles over here. And then Pearl Jam and Pantera, yeah!

What was the first gig you played?
My first ever gig was at a wedding, when I was 9 – me and my brother played covers. It was Metallica and Pearl Jam covers at a wedding, so that was cool.

And the first gig you ever got paid for?
I don’t know – it would’ve been with my first band called Penny Lane. It was a really heavy metal band in like 2004 or something. Probably a small Brisbane show.

I saw you guys at Download – it’s the first time I’d ever heard of you, but you blew me away – it was just after ‘Let The Ocean Take Me’ came out. It’s your fourth record, it did pretty well in Australia, and people here have heard about you guys off the back of this record and Chasing Ghosts – how have you found the reception in general?
It’s been great – this is like the best-selling record we’ve had so far. It charted at number 30 in the states – it’s launched us into something new. You can kind of tell by the sold-out shows – it didn’t happen before this album. I don’t know what it is about it.

What would you say your influences have been for the record?
I don’t know – it’ hard to say. We don’t write music to suit any specific genre or anything – we just write what we want to hear. So there hasn’t really been any – if there are any influences, I’d say 80s bands, which is funny.

And what are you listening to at the moment?
I’ve listened to the new Taylor Swift album. I love her. Yeah, that and an Australian band called Young Lions, who are not very big, but they should be huge. And actually – Lower Than Atlantis, too. The new album’s great.

Is there anything interesting that you’re reading at the moment?
I’m not really a reader – I’m a movies guy. I saw the new Hunger Games the other day – I had mixed emotions. It was a build up to the second part, but not much happened!

Do you have any advice for new bands starting out?
Yeah – to play shows and tour and build yourself before you have merch and cool photos and video clips for a song without an album.

Are you guys going to be heading back into the studio soon?
Not soon, but we will be next year sometime!