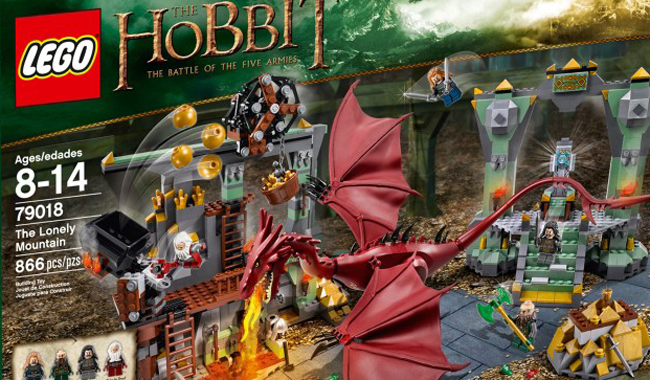 The Hobbit: The Lonely Mountain

With the December 2014 cinema release of the final The Hobbit movie ‘The Battle of Five Armies’, it is only fitting that Lego the Hobbit has made its return for a third wave of sets. The scene of the Lonely Mountain set should already be familiar to fans of the movies from the second film where Bilbo and the Dwarves encounter Smaug, the dragon voiced by Benedict Cumberbatch who guards the treasure that the dwarves seek. Whether the set better belongs to the second film ‘The Desolation of Smaug’ or the third one, it is certainly a fitting final large set for the Hobbit series. We finally get the big dragon and its lair in that now familiar Lord of the Rings fantasy style.

The headliner of the set clearly is the dragon Smaug. Smaug is built of 11 new moulds making up his body, tail and wings with further bricks being used to make his claws and some spines on his back. When the first images of this set were released, it was impossible to appreciate the sheer size of the dragon. The figure is truly massive compared to the usual minifigure scale. We are talking approximately 18 inches in length including the tail with a similar wingspan standing 9 inches tall. The body, head and leg pieces are nicely printed with scales and other details and the wings are partly made of softer rubber, allowing the wings to fold and look natural in different poses. This is the most impressive Lego dragon I have seen and by far the largest figure in my collection.

The other five minifigures are all unique to the set although all are familiar characters who have appeared in different outfits before. Bilbo and the Dwarves all have the same faces making them recognisable from their previous outings but this time wearing the ornate clothes and armour that they would have been able to find at Erebor (The old Dwarven city within The Lonely Mountain).On all the figures we therefore have elaborate printing on the front and back of the torso part. However, as all of the figures use the short unmovable legs, there is no leg printing. While this would have been nice, it really does not distract from the overall look and the figures look great as usual.

The Lego pieces used in the set are also worth a mention. There are a lot of golden and sand green parts which are still fairly rare and add to the overall value of the set.

The building of Smaug is like most ‘maxi’ figures. The parts snap together easily and leave the required movement to the model where it is needed. It would have been nice to have a little more flexibility to the tail, purely to make the figure easier to store or display, but this is a minor point and the length is probably needed for balance anyway.

The scenery part of the build is very familiar if you have built any of the other Hobbit or Lord of the Rings sets. The scenery is made up of two façade sets depicting a mining area and the King’s throne attached together with a hinge to allow an angle between the two. In addition we get what seems to be a pile of gold and other treasure to set the scene.

The mining area has lots of play features built in such as a bucket that can be moved and hoisted up and down, a secret entrance which the Bilbo and the Dwarves can use and a catapult that can be used to throw molten gold on Smaug in a loose reference to the second film. The build here is simple but the play features added do give some nice touches to the build.

The throne area has less play features, though the stair section can be pushed out revealing another little space with some more gold inside. The throne itself is a very nice design which closely resembles the throne from the film. The Arkenstone can either be attached to the throne as in some of the scenes from before the time of Smaug or there is a small area underneath the mining area where the stone can be kept hidden.

The arch around the throne is very elaborate with lots of green and gold giving the sort of haunted old look that fits the room well.

The pile of gold section is really just an extra that doesn’t really refer to anything particular except the wealth of treasure in the room. In the middle of the pile there is a large box where some further treasure can be kept.

There are no real challenges in any of the sections when it comes to building it. There are some similarities between this set and the Lord of the Rings set Mines of Moria (9473), but luckily by adding colour instead of just the gray bricks, the Lonely Mountain does look a lot better.

The Lonely Mountain clearly falls more on the side of a play set than a display piece. Having said that, Smaug in itself is worthy of display if you like the Lord of the Rings and The Hobbit themes.

The minifigure selection is as expected. There is really not much more you could add to the scene aside from more of the dwarves which you probably already have from the previous sets. All of the figures are unique, so collectors will need to get these even if this is the fifth different Bilbo Baggins. The background scene is nice, but not really worthy of displaying by itself so in all likelihood the pieces will either be stored or sold when it comes to adult fans.

As a playset this is great though. There are enough play features in the set by itself, but it also lends itself, not only to other The Hobbit and Lord of the Rings sets, but really any Castle, Kingdoms or older knights themed play. A large dragon is something any knight could do with as an enemy!

Overall, the Lonely Mountain is a nice set and probably the second best set in the Hobbit theme after the superb ‘An Unexpected Gathering’ set (79003) from 2012.

Hopefully this won’t be the end to the Lord of the Rings/Hobbit theme in Lego, but with no more films in the pipeline it is hard to see more coming out under the licence. It would have been nice to see another collector style set like the Tower of Orthanc (10237) though. There are certainly plenty more scenes that could do with the Lego treatment at least from the Lord of the Rings trilogy so fingers crossed there is yet more to come.