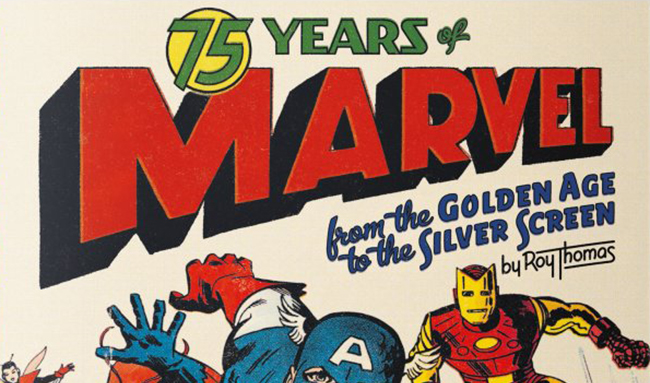 75 Years Of Marvel Comics: From The Golden Age To The Silver Screen Review

In recent years Taschen released a rather hefty volume that looked at the 75 year anniversary of DC comics. A weighty tome that left very few stones unturned. It’s no surprise then that for the 75th anniversary of Marvel that they do a likewise job on this subject as well.

Marvel are literally kings of the world at this stage thanks in no small part to their gigantic success on the silver screen. And whilst the silver screen is touched on in this volume, the large focus is predominantly the work they have produced in print – here captured in high pixel quality and printed in this 712 page hardback (and yes it comes in its own protective box. And it ought to as it’s not a cheap item. At £135 though you are forever sure to get the highest of quality from Taschen.

Leafing through it’s an impressive array of stills and illustrated graphics that they have captured. The pinpoint details is second to now. Old covers of Marvel issues now look more vibrant that they did when they were first printed. There is little to no blur effect on any of the images.

The volume also comes with a fold-out timeline (that is four foot long). The book charts in words as well the history of the writers and artists (to which there are biographies of each). Readers can follow the creation of each character down the timeline and through the decades. New characters and publications issued are exemplified though front cover recreations, in book examples, sketch designs and merchandise examples as and when they occurred in time.

Taschen have done a bang up job of this – with Marvel doing such a strong business with their Marvel Cinematic Universe – one can hope that Taschen get ideas rolling for publications based around this as well.

A solid collector’s item for fans of this enduring company and the work they have produced.