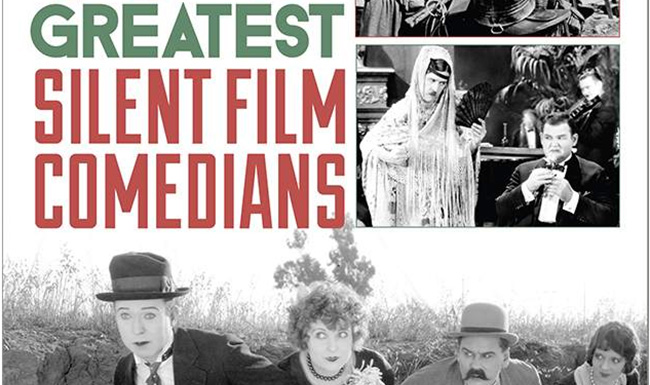 Most books about films are written by film critics, historians or theorists. ‘100 Silent Film Comedians’ is different in that it is written by a self-confessed film fan. In the preface James Roots gives a lengthy background biog on what drew him to silent film comedy, from Hollywood at any rate. Roots explores his upbringing in Toronto, growing up as a deaf man with a father (who also profoundly deaf) he clearly had a fractious relationship with. The author states that he fell out with his father on many occasions but one thing that always drew them close together was their enjoyment of watching silent comedies. Over the years Roots’ passion for these old films led to him to collect what he could on film, video and later DVD. Others also helped him in his quest. At the end of his autobiography in his preface Roots’ touchingly dedicates this book to his late father. But don’t be fooled, the author clearly has an expansive knowledge on his subject and with the distance of time and available material extant that there is available he recognizes that there are floors in his knowledge.

The fandom aspect of the book betrays itself in the way the book is laid out. He gives up on average a few pages to each comedian spread out over its entire 417 pages, listing each silent film comedian and ranking them from a joint number 1 to 100; it is no surprise nor is it controversial that the two at the top are Charlie Chaplin and Buster Keaton and the bottom approximately 50 are given more cursory attention. He proceeds to rate each comedian with ranking as to how funny they are out of 40, their creativity, teamwork, timelessness (where the brilliant Keaton rightly outranks Chaplin), appeal and curiously, intangibles. His writing style also demonstrates his enthusiastic amateur status with his loose talk of who is a genius (a term Roots uses with unfettered abandon in the early stages of the book). Again not surprisingly Laurel and Hardy are in third place and although today they are better known for their Hal Roach sound comedies of the 1930s it is sometimes forgotten that they were very talented silent comedians thanks largely to the imagination and hard work of Stan Laurel. They are one of the few rarities, including Keaton and Chaplin whose careers improved with sound. Chaplin had to re-invent himself and dismiss the tramp in order to do this. Roots also points out that Laurel and Hardy are less popular with a female audience while still loved by a male one. I’m sure this is a suck a finger and hold in the air test of this but there does appear to be some truth to it.

What is surprising is that the 4th place is not taken by bespectacled Harold Lloyd but instead by Charlie Chase, a comedian who is mostly forgotten today but never the less on viewing his comedy demonstrates a subtle originality missing from many silent comedians in which he did not have to resort to violent slapstick in raising a laugh; it would be interesting to see more of his films and make them more widely available. Lloyd, ranked number 5 is given much criticism by Roots and this is largely due to the spiteful type of humour that runs through Lloyd’s films, namely he seems to have an obsession in doing a great deal of harm to innocent bystanders without any other reason other than doing harm. The author skims across Lloyd’s background and does suggest that some of this is possibly down to his personal upbringing. Roots does have even less glowing remarks about a biography on Harold Lloyd by Richard Schickel whom he claims “didn’t bother doing any research, and…has nothing but contempt for his subject matter. Reprehensible”. Elsewhere the author manages to unearth a creepy side to the baby-man that was the white faced Harry Langdon (ranked No. 6) and reminds us of some of the great silent comedians, forgotten or otherwise such as the adroit big fella, Roscoe Arbuckle (the book avoids going into the salacious gossip and wrongful conviction that led to Arbuckle’s sad downfall), Mabel Normand, the host of ladies and gentlemen who supported Chaplin and appeared in many of his earlier films such as the wonderful Mack Swain, Ford Sterling and Fred Mace.

Others are surprisingly low ranked and are still today known faces and comics (maybe partly to do with their twitches and physical strangeness) such as Laurel and Hardy sidekick James Finlayson (No. 41) and the cross-eyed Ben Turpin (No. 29). Accompanying each actor is a (helpful) photograph acting as a reminder and a reference point as well as incomplete filmographies and comments on stand-out, representative or ill-judged films that they appeared in. As a reference book this is invaluable even if the writer’s comments are clearly very personal.