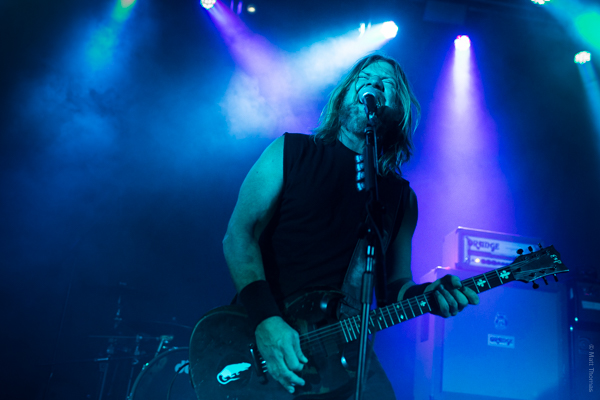 The term ‘reunion’ has been banded round these past few years, everyone’s doing it and everyones buying into it too, regardless of the “they’re doing it for the cash” sentiment in the back of all our minds. Tonight’s show and this current tour phase from Corrosion of Conformity is being dubbed a ‘Revival’ as if to try and remove itself from the reunion cliche.

Tonight, however, is a genuine reunion. In 2009 CoC returned to the stage after a 3 year hiatus, but without frontman and guitarist Pepper Keenan. Keenan being part of the monstrous supergroup Down meant that he was tied up with many touring schedules and not able to return to the fold. The fold, as it happens, went on putting out two albums and touring as a 3-piece playing the older, harder material (pre-Pepper) out on the road.

As Down go into a slumber, Keenan is back with his CoC brethren and here we are. Dusk on Oxford Road and the commuters heading home are filtering though a sea of band shirts heading into the University. The doors of the Academy are pasted in ‘Sold Out’ notices and punters are being patted down and waved through the doors. Everyone loves the pat down right?

Unfortunately, there’s a delay getting in and I miss the support Hang the Bastard‘s set.

“[they were] like Iron Monkey” a guy says to me at the bar. I nod my head in approval.

There’s no fanfare, no outlandish introduction; blink and CoC are onstage, bathed in blue LED washes.

“Thank y’all for showing up, couldn’t think of a better place to do this” says Pepper straight out of the gate and the slow steady encompassing of ‘These Shrouded Temples’ crawls into the room. The front row is a mix of filthy smiles and open mouths as a 9 year wait has come to an end. It’s an interesting opener and unexpected. When ‘Senor Limpio’ kicks in the crowd comes to life. Guitarist Woodie Weatherall is infectiously loving every second on stage. He grins wildly, mouthing the lyrics and gliding around alongside Pepper. His guitar is worn down and scratched; he may or may not have been using it as a wallpapering table at some point.

This is the very first show for CoC in their current formation, so there’s a hint of rust that takes a song or two to knock off, but after that the show ploughs through 90+ minutes of material from the Blind and Deliverance era through to 2005’s ‘In the Arms of God’. Mike Dean lurks over to the right carrying song after song with effortless groove; Reed Mullin hits so hard on the kit, yet looks barely out of breath.

Keenan belts out ‘Heavens Not Overflowing’ to fists in the air and ‘Long Whip/Big America’ gets sang by nearly everyone in the venue. Both Keenan and Weatherman are fantastic players and Keenan’s technique is a little reminder that he is very much responsible for the soul that has seen Down have so much success too. ’13 Angels’ gives a breather, but is quickly followed by ‘Albatross’. Keenans voice soars alongside the barks and a flurry of feet and fists fly over the barrier as security get their quota of crowdsurfers in. This is a true greatest hits set (from the Deliverance era anyway) and as the temperature rises in the Academy they blast out the merciless trio of ‘Broken Man’, ‘Vote with a Bullet’ and ‘Clean My Wounds’ for the encore.

I leave sweaty, ears ringing and sore calves (I’m short, got to tip toe at times) -a lot has been put on Pepper returning to the band in the media and there’s an underlying vibe that he’s doing the rest of the guys a massive favour returning from the glories of Down. They undoubtedly fill bigger venues with this lineup, yes, and probably take home a better stash of cash, but for me tonight wasn’t the Pepper Keenan show. This was a true Corrosion of Conformity show. A band who, at least for me, seem complete in this form. A heavy metal band with groove, dynamism and raw musical talent – all of which seem rare things these days and the music is still just as relevant as it was 10 years ago.

Kings of the Rotten indeed. Welcome back Corrosion of Conformity, we’ve missed you.