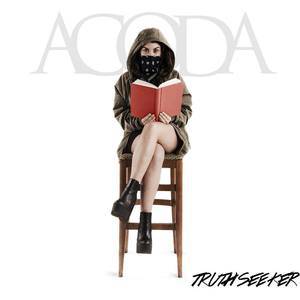 When I reviewed ACODA’s debut record for Glasswerk back in 2013, I couldn’t have predicted that 18 months later, their sophomore record would land in my inbox too. Listening to the band’s second release only reinforces the admiration I had for the Corby quartet the first time round.

Album opener and single ‘Make It Up As You Go’ is a catchy cacophony of crashing guitars and soaring chorus, followed by the post-hardcore-influenced lead single ‘Whispers Like Roars’, which will have audiences head banging all over the UK and hopefully beyond, because the four-piece sound bigger and better, more assured on this record, and it comes across.

The songs are much more cohesive on this record; it sounds as though the band are closer to pinpointing their unique sound, whilst still combining elements of rock, progressive metal and post-hardcore into a blend that just…works. It seems that life on the road, playing their own headline shows and a run of festival dates last year has given them a newfound, becoming swagger.

Standout track, and possibly my favourite on the record ‘Won’t Go Running’ is an absolute gem; it’s a brilliant, anthemic song. Single ‘Round The Sun’ is another that’ll invite crowd sing-alongs in a live setting. It’s heartening to hear a band you liked from the start continue to grow in the same vein and start to sound truly massive. Album closer ‘Hymnyin’ is a slow builder with an epic fade out that showcases a dramatic, atmospheric element to the band’s sound that they’d do well to explore.

The record itself is impressive, but it’s definitely one that will sound even better live and I for one, am excited to see what this band will achieve once the rest of the world gets a chance to hear these songs.