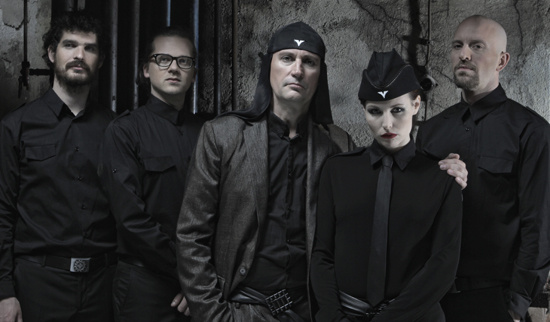 The most important band ever to emerge from Eastern Europe, industrial icons Laibach caused controversy from the offset, their deadpan pitch perfect parody of Fascist politics and aesthetics annoying many on the right and left (some of the latter thought they were real neo-nazis). They now seem terribly prescient at anticipating the carnage caused by nationalism in the former Yugoslavia, but satire wasn’t enough to avert chaos. They have created some of the most extraordinary cover versions ever, turning bland pop songs into works of eerie menace, sometimes simply by singing them in German.

Tonight they’re in Glasgow, and a packed crowd are listening to light classical music waiting for the band to mount the stage. Laibach take to the stage…slowly. Two men on keyboards, then vocalist and keyboardist Mina Spiler, to washes of abstract sound, allegedly inspired by Edvard Greig’s unfinished opera, Olav Tryggvason, against a backdrop of geometric, monochrome visuals. Then, finally, Milan Fras, with his distinctive moustache and hat opens his mouth, his bass voice sounding utterly primal, coming from the bowels of the earth, having grown even deeper over the years; if he is the same band member, that is, Laibach being a semi-anonymous collective with an interchangeable lineup.

The first half of the set is made up of their latest rumination on the state of Europe, Spectre, kicking off with “Eurovision” and its bleak chorus of “Europe is Falling Apart”. By the time they get to “The Whistleblowers”, with its insanely catchy whistled riff sounding like something out of an old war movie, they have the crowd firmly in the palms of their hands.

Fascist imagery slowly starts to come in with archive footage of jackboots to “Walk With Me”, where Kunis’ glacial vocals mesh perfectly with Fras’ stentorian growl. The set culminates in “Resistance is Futile”, which is a fairly accurate description of experiencing Laibach; as bombastic and Euro kitschy as they can knowingly be, the combination of rhythms, visuals and ideas is intoxicating.

They return with Mina Spiler crooning a lovely cover of Each Man Kills the Thing He Loves, which again is juggling high culture and kitsch; while the lyrics may be Oscar Wilde, and the song itself written by Peer Raben for Fassbinder’s Querelle, the song itself won a Razzie for worst song in a film of that year. The second half of the set sees go through their back catalogue, but they save the favourites for the encores. Geburt Einer Nation (Birth of A Nation) their crazed Teutonic cover of Queen’s One Vision and brutal new Beat classic Tanz Mit Laibach both see the crowd erupt.

The evening ends in “Leben heisst Leben”, their ironic German language version of Eurotrash classic “Life is Life”, a statement one can’t really argue with. With both neo nazism on the rise in Europe again, and a lot of dull, earnest music about, I think we need Laibach more than ever.
.
Written by Brian Beadie