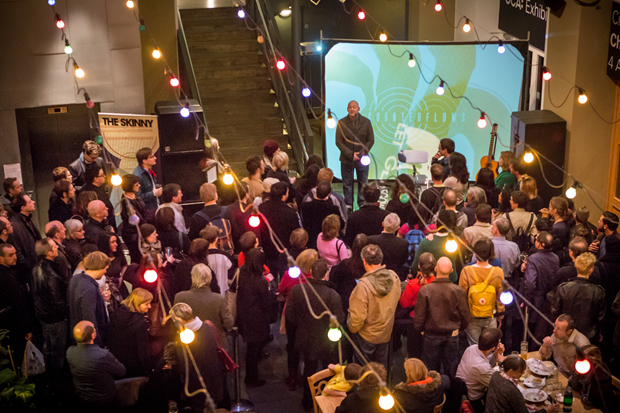 Counterflows is one of the newest, and most interesting music festivals in Europe. Initially running concurrently in Glasgow, London and Berlin, it now only runs in the latter two cities over Easter. Over the years it has brought together figures as diverse as Golden Teacher sharing a stage with free jazz legend Joe McPhee, and seen Michael Gira play a deconsecrated church on Good Friday, which was simply one of the best gigs I’ve ever seen, anywhere.

This experimental music festival is an inestimable guide to the variety and innovation occurring in what the programme calls “marginal music practice”. On this evidence, there’s far more freedom and excitement on the margins than in the mainstream.
First up I saw the festival’s featured artist Richard Youngs, a restlessly fertile musician who I’ve seen perform on instruments from guitars to iPhones, in a different genre every time. This time he took on contemporary classical; is there nothing he can’t do? Richard didn’t actually perform in his Experiment For Four Demolished Structures for 4 Voices; he just introduced it, by telling us to feel free to wander about to get the best sounds. Four singers each mounted on a plinth sang about four demolished brutalist buildings, their unaccompanied counterpoint creating some beautiful moments. I pretty much stood still, ended up closing my eyes, soaking it all in.

The spectator’s or listener’s physical position towards the work would become something of a theme in this festival. Florian Hecker is one of the most respected sound artists in the world, and he explored the acoustics of CCA 5 with a series of speakers suspended from the ceiling. From these emanated a series of passages of electronic notes and harmonics, the audience being able to walk through and explore the sonic space created. It was a pleasure to see festival co-curator Alasdair Campbell absolutely blissing out on every note, and hipsters covering their ears in fear when Hecker turned the volume and intensity up to sometimes disquieting levels.

On Saturday night, Neil Michael Hagerty presented perhaps the most straightforward prospect, in that this was a rock gig where you simply stand and watch the band. A festival in which Hagerty is “the most straightforward prospect” is indeed, eclectic. Hagerty gained notoriety back in the ‘90s with his band Royal Trux, who a major label foolishly signed looking for the next Nirvana, not expecting the scorched earth rock n’ roll or levels of drug abuse the band would present them with.

Hagerty looked as cool as it’s possible for a man in a jacket three sizes too small for him and beige loafers to look, and commanded the stage. His band The Howling Hex were made up of a drummer with the most minimal drum kit and mini glockenspiel, giving the music a real jazz feel as it lurched from spasmoid rhythms into proper shitkicking garage rock, while a geeky looking man mainly sat on stage and occasionally joins Hagerty in song. It was irresistible, as it all came to a climax in “White Horses”.

The evening ended up the Art School with a 4 hour DJ set from Rabih Beaini, a Lebanese DJ and musician, with one foot in the avant garde camp, and one in techno as Morphosis, with his incredible album What We Have Learned. It’s a cliché to speak of a DJ set as a journey, and many are detours not worth taking. This however, was an enthralling set, Beaini using decks and delays to find links between traditional Middle Eastern music, minimal techno and even free jazz, in a way that felt totally right and not affected. It was a subtle set, with incredible attention to detail, and if the crowd began by head nodding and watching him, they were soon losing themselves on the dancefloor. Beaini went deeper and further than any DJ I’ve seen in ages; I can’t wait to see him again. And can’t believe I had never heard of him until Counterflows brought him to my attention.