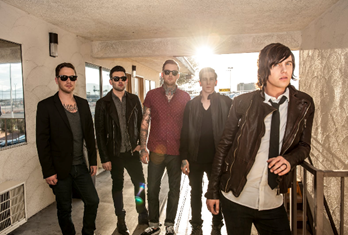 Wading through a sea of takeaway cartons and camping paraphernalia left by the passionate fans who spent the entire day outside the venue gives me a vague idea of what to expect from the crowd at the Newcastle show of Pierce The Veil’s co-headline tour with Sleeping With Sirens.

Sure enough, the venue is packed wall-to-wall with fans as young as 11 or 12, accompanied by their parents and older fans like me, stood at the back where I have a perfectly good view over the sea of teenagers.

First band on, Issues rip through a short-but-sweet six-song set. Vocalist Tyler Carter is a confident and assured frontman, and has no trouble warming up the crowd with fan favourites such as ‘Never Lose Your Flames’ and ‘Mad At Myself’. It seems a shame that the band have to leave the stage after a mere half an hour; I for one can’t wait to see them playing longer sets on this side of the Atlantic.

Sleeping With Sirens have long since made their mark as the marmite of the alternative music scene. Love them or hate them, you can’t help but admire their showmanship. Kellin Quinn can whip teenage girls into a frenzy like few others, but unfortunately poor sound quality mar the band’s set. New material such as ‘Go Go Go’ do not sit well with older favourites like ‘A Trophy Father’s Trophy Son’ – it seems that the newer songs are a little divisive. As an ambivalent onlooker, I’m more than a little relieved when the band’s set is done – Quinn’s vocals are alright on record, but when hearing the frontman’s high-pitched crooning live for a full set, they start to grate.

Although the room empties out a little for Pierce The Veil’s set (a distinct absence of rabid Sleeping With Sirens fans is noted by my gig buddy), a slightly older and equally enthusiastic crowd meets the Californian post-hardcore quartet. Schooling their fellow touring musicians with an 11-song lesson in how it’s done, the band play a mix of old and new songs, from fan favourites like ‘Bulls In The Bronx’ to a wonderful acoustic rendition of ‘I’m Low On Gas and You Need a Jacket’, and the crowd respond by giving the band everything they have. Calls for a circle pit fall short, but the crowd are jumping up and down, dancing through the confetti from the cannons and having a blast. Joining the Pierce The Veil crew for their last song, Kellin Quinn delivers his best performance of the night with ‘King For A Day’, which leaves the majority of gig-goers hoarse from screaming along, word for word.