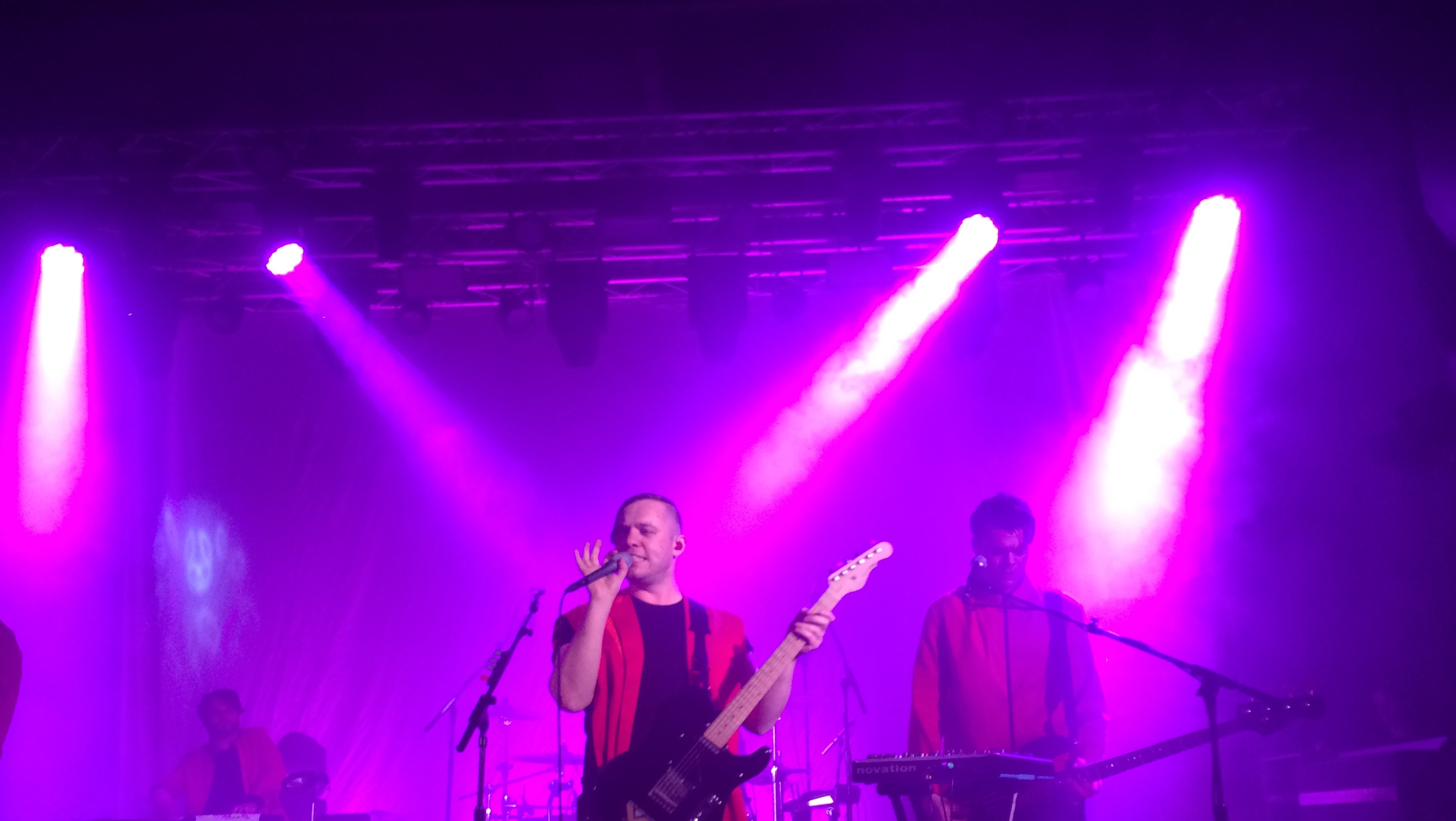 It’s rare to find a band who successfully fuse politically eloquent lyricism with upbeat layers of pop hooks in an accessible fashion; however, genre-defying Everything Everything have done just that tonight, evolving a new sense of rigour and flair.

A totally diverse demographic audience filling a sold-out Manchester Academy 2 on the warm spring evening were firstly entertained by hauntingly atmospheric electronic three-piece Vaults. Much of their material exerted chest-trembling bass alongside the impressive use of ambient synths in what appeared to coalesce Massive Attack’s cinematic ambience with Grimes style hypnotic beats.

It was the highly anticipated return of Everything Everything, though, which triggered screams and cheers from the crowd. The band graced the stage uniformed with new bright vermillion attire – a fitting reflection of their colourful and bold sonic shift in sound.

The as of yet unreleased third album Get To Heaven opener, ‘To The Blade’, kicked off a setlist that cleverly mixed content new and old. The dramatic track initially lulled the audience with deep bass hums and vocal croons, before crunching guitar chords prevailed and eventually lead into a cutting solo – sounding reminiscent of Muse’s Origin of Symmetry EP.

The set continued integrating old classics such as Kemosabe and Schoolin’ with new indie pop style songs including title-track ‘Get to Heaven’ and ‘Regret’, however it was new pulsating mid-set track ‘The Wheel (Is Turning Now)’ that caught most attention. Jonathan Higgs’ claim that new material was ‘Yeezus’ inspired made perfect sense whilst he transformed into a furious anti-establishment demon, ferociously attacking the poisonous rise of the Farage-led right-wing (whilst swinging his new extreme hair-parting in every feasible direction), before the song broke-off into a Kanye West ‘I Am a God’ style monstrous beat.

The next distinctively impressive new track, ‘Fortune 500’, featured a similar sub-woofing energy. Higgs damningly pleaded the oxymoronic: ‘I’ve won, I’ve won they told me that I won’ relentlessly as if having tumbled into a dark hole of depression through deceit and deception, until resolutely threatening ‘I am compelled to take you by the throat’.

Perhaps the crowd’s most reactive moment arrived towards the end of the set in response to rough and ready, tribal-themed dancefloor single, ‘Distant Past’. The crowd erupted into wonky dance routines in tandem with the potent EDM style song – evocative of other contemporary piano-house driven indie anthems such as Django Django’s ‘Reflections’ and MS MR’s ‘Painted’.

The band were then summoned back on-stage by a demanding encore campaign, and the emotional peak of the performance undoubtedly ensued during the progressive ‘No Reptiles’, which showcased Everything Everything’s playful yet thoughtful lyrical talent in asserting ‘it’s ok to feel like a fat child in a pushchair, old enough to run, old enough to fire a gun’. Higgs then displayed his surprise in stating ‘I can’t believe people are singing along with this already’, however, with Huw Stephens’ BBC Radio 1 mid-week airing of this in a live session, fans were bound to recall such a memorable ballad.

This intimate performance brimming with vitality confirmed, if any reassurance was ever necessary, that not only is there much to be excited and impatient for on the June 15th album release, but that Everything Everything are continuing their admirable grudge-driven political struggle against the faults of modern day human existence. However this time around, unlike such earlier riddle-soaked instalments as Man Alive and Arc, Higgs and co have found a way to vent their disenfranchisement in a much more overt and aggressive nature. ‘Get To Heaven’ appears to be meaner, louder and a more confident beast to previous material.

Whilst the band have yet to implement a definitive style to characterise themselves by; through the continued mix of quirkiness and originality, alongside a growing degree of accessibility – the quartet are rightfully reaping astounding results.