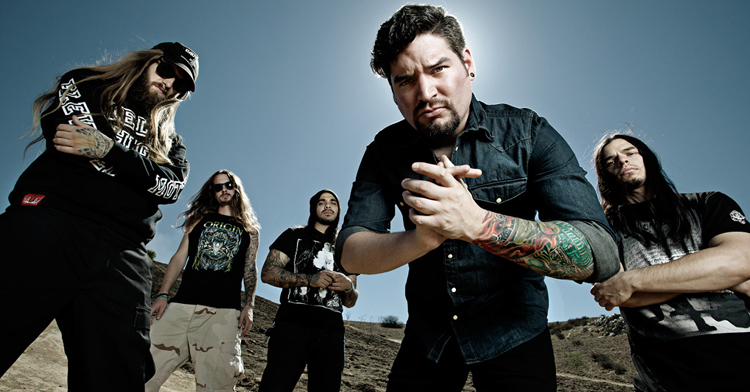 Oxford Road in Manchester may be devoid of students at the start of exam season, but there is no shortage of hardcore fans by Manchester’s Academy 1, the venue for the last Impericon Festival of 2015. The queue snakes up the road and past the university’ student union building and bewildered passers-by shake their heads in awe at the amount of black being worn on such a sunny day.

Opening band Adept play to a mostly-empty room as punters slowly trickle in, but they don’t let this put them off any; the Swedish metalcore mob give it their all, and it just seems a shame that absolute bangers like ‘Secrets’ aren’t played to a bigger crowd. Next up are Desolated. Hailing from Southampton, the band have a dedicated following that start the first pits of the day. “MOVE! MOVE! MOVE!” screams vocalist Paul Williams. His constant attempts to elicit more of a response from the crowd mars the band’s performance a little, but the five-piece do well with their set, with new song ‘The End’ hinting at their potential as a live act.

Mancunian Deathcore quintet Ingested are the first band to have the rapidly filing room moving as one. The band have their hometown crowd up in arms, showcasing songs off their latest record ‘The Age of Extinction’, as well as old favourites like ‘Skinned and Fucked’; their experience is evidence in their set, the band have no trouble inciting chaos and lead singer Jason Evans is left in awe by the end of the set.

Being As An Ocean are a band with a formidable live reputation. The American melodic hardcore outfit deliver a slightly lacklustre performance – for a band that are well known for giving the audience chills, their set falls short of the bar they have continually raised in the past. However, the five-piece are met with enthusiasm, regardless, and songs like ‘The Hardest Part Is Forgetting Those You Swore You Would Never Forget’ garner the impassioned singalongs that few bands can elicit this early on in the day.

Even during an off performance, Being As An Ocean are a tough act to follow, but the ferocity of Carnifex is well-documented. The American deathcore quintet are old hands at causing carnage, and from the first down-tuned riff of ‘Slit Wrist Saviour’ to the last notes of ‘Hell Chose Me’, lead vocalist Scott Lewis has the crowd eating out of the palm of his hand.

The latest record by Deez Nuts has helped to redefine the band. Always a band to give their live performance everything, the new songs played off their latest release ‘Word Is Bond’ have the crowd moving, moshing, and dancing. The Australian hardcore punks’ new songs ‘What I Gotta Do’, ‘Face This On My Own’ and set opener ‘Word’ marks a shift in lyrical focus that the crowds they play to have no problem getting behind. Although I’ve seen Deez Nuts before, it feels like they’re finally worth paying attention to.

Whitechapel are best described in one word as a live act: impressive. Love the or hate them, the marmite-like deathcore outfit from Knoxville Tennessee lay waste to the venue during their set. From the first, the crowd is moving to ‘The Saw Is The Law’. Their nine-song set is over in a blur of flying fists and metal-infused fury, leaving the room bruised, beaten and in awe.

The Ghost Inside could easily have headlined the festival – the hardcore mob hailing from Los Angeles are masterful as a live act. There is a celebratory and reverent atmosphere in the room as they tear their way through a set that seems far too short. Lead vocalist Jonathan Vigil is a brilliantly charismatic frontman – circle pits and mosh pits are standard. Every word of the songs from the band’s latest record ‘Dear Youth’ are screamed back passionately. The set is full of crowd favourites, from ‘Unspoken’ to ‘Dark Horse’ to set closer ‘Engine 45’, every second is a triumphant example of hardcore at its best.

Suicide Silence take to the stage as the crowd slowly starts to disperse, but the five-piece are veterans. Lead vocalist Eddie Hermida has settled into his role fronting the band, and their 10-song set is a chance for him to showcase his talents. The set end with ‘You Only Live Once’ and the crowd go wild – the new era of Suicide Silence is in full swing, and it promises to be amazing.

This is the last in a string of Impericon Festivals. Sweaty and broken, the punters shuffle to the exit, already excitedly discussing the prospect of next year’s festival. After the show that’s just been put on, the bar for next year has been set pretty high.

Venue: Manchester Academy
Support Band: All of the hardcore.