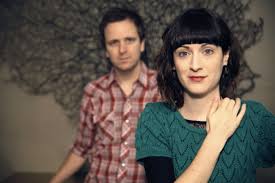 Openers Lewis and Leigh, a male-female duo from Mississippi and Wales respectively went down quite well with the audience. Their languid acoustic blues features some lovely vocal harmonies and songs like Stone By Stone had a deep lyrical quality under the pleasant sound. A slightly sleazier song The Late Show was entertaining and their faster paced closer What Else Is There To Do was perhaps the pick of the set.

Sarah Howells and her band Paper Aeroplanes were on top form from the start of their performance. Combining a folky acoustic core with strident drums, deep bass lines and shimmering keyboard melodies works very well for them. But it is Howells’ vocals that really stand out. The emotional delivery and soaring tones are highly evocative and the occasional fragility of her voice masks a power she can call on when required. Howells is also an engaging frontwoman, chatting with the crowd between songs about everything from a recent trip to Germany to her new skirt, looking very relaxed at the centre of the small stage. Guitarist, and main foil, Richard Llewellyn adds strong harmony vocals as well as some fluid guitar work.

Several tracks from the band’s latest album Joy really stood out. Race You Home started with the vocals soaring over picked guitar and gentle keyboards before the pace quickened. Emily was quite beautiful while the title track was recreated with three lead vocals, compared with the 17 voices that Howells said had been used on the album recording.

Several songs from previous albums were played too. Multiple Love was a highlight, with Sarah Howells dragging her mic stand to a piano off at the side of the stage and producing a flawless vocal performance of a lovely song. Red Rover was something of a fan favourite, although apparently not in Germany according to Howells. Edge Of Love was slow and passionately sung while Days We Made had the folkiest feel of the night, bright and featuring fine vocal harmonies.

All too soon the set ended with Books, complete with some good audience participation and Guessing Game which provided a big vocal finish. The break before the encore was short and a fine night was concluded with Little Letters and a gorgeous rendition of the winsome Circus to close in fine style. Paper Aeroplanes have built up a good fan base in Scotland and will be back later in the year. They are a band well worth seeing.