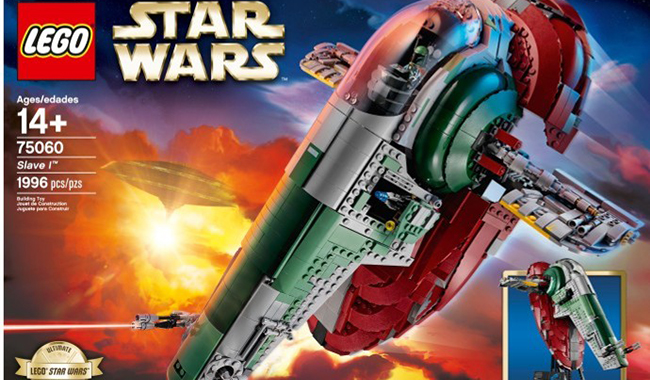 Duh!  Star Wars! Empire Strikes Back to be specific. This set is taken from a key sequence at the end of the film where Boba Fett is having the recently encased in carbonite Han Solo loaded into his signature mode of transport – the Slave I. If the Millennium Falcon is the most famous ship in the Star Wars universe – the Slave I is pretty much the runner up.

Ok so building this beast can get a bit laborious at times. The inner guts of the piece where you create the bones and structure of the ship is never going to be as gleeful as the outside shell; but thankfully they makers have separated it into 13 plus bags/stages so you can stop and have a rest.

Sure there are parts that you put together that will start to look familiar. The base of the shop is the first thing to come together, but along the way you will create parts of the cockpit and even the loading bay (hello Carbonite Han solo!).

We also recommend skipping the main body of the ship if it does start to become a bit of a drag and instead open the final bag of pieces as this bag contains the stand. It in itself is a technical build, but it’s nice to have it ready for the Slave 1 to slot into when you are finished.

The latter stages of the ship comprise the outside walls and are a joy as colour and life really starts to come into play.

At nearly 2000 pieces this one is going to take a day to put together. We recommend spreading it over a weekend to save those fingers from getting hurt!

Oh my! Well what else did you expect a reviewer to say!

Star Wars is off to a flying start this year (no pun intended) with this latest set in their Ultimate Collector Series. And it seems obvious that the Slave-1 should get the treatment being one of the most iconic of the ships in the entire franchise (Seriously!  We would bet limbs that it will appear in the new movies to come). And we’d bet Luke Skywalker’s left hand that this one sells out fast!