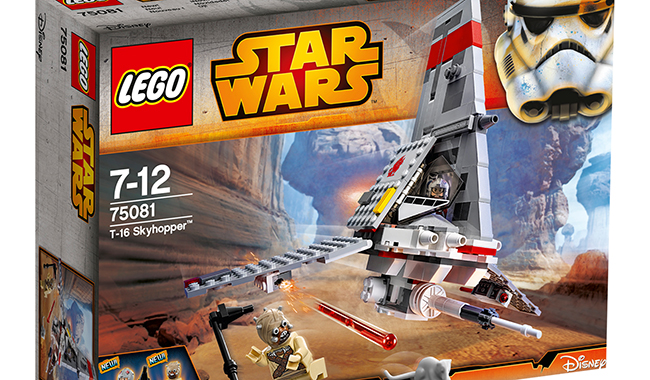 The T-16 is a bit of an easter egg in the Star Wars universe. In the original trilogy, the only appearance of the ship was as a model that Luke Skywalker was playing with while giving C-3PO an oil bath. Most memorably however it exists in the quote from Luke in discussing the up and coming attack on the Death Star: “I used to bull’s-eye womp rats in my T-16 back home. They’re not much bigger than two meters.” In later special editions the ship can be seen flying or in the background of a few more scenes, but essentially it is only part of the background story of Luke’s childhood at Tatooine.

We don’t get a Luke Skywalker minifigure in the set but this seems completely reasonable considering we never see him flying one in the movies either. We do however get a standard gray rat figure in the set so the unnamed T-16 pilot can recreate these activities, even if it doesn’t really do much justice to the womp rats.

The pilot figure doesn’t seem to be based on anything seen in the movies. He wears a dark red jumpsuit with very little detail aside from the usual harnesses. The gray helmet looks the same as the standard rebel pilots’ helmets but with different insignia printed on it. The head is also similar to many of the current pilot figures in that it is double sided with one side having a printed visor for the helmet.

The second minifigure is quite possibly the biggest draw of the whole set. The Tusken Raider, better known as sand people in the movies has been created by Lego only once before back in 2012. The 2012 version was very basic with just a printed head giving an approximate look, but the new version has been given a thorough update which brings it to the modern standards. The new version has printed legs and body but the crowning piece is a new moulded head. The only possible complaint about the figure is that we don’t get more of them in the set. This makes it relatively expensive to gather up a group of them!

The build of the T-16 is surprisingly interesting for a set of this size. The large ‘sail’ wing design is the same as on many larger sets such as the old UCS Imperial Shuttle. This technique uses technic pieces built in sideways alignment and really creates a rock-solid  wing for a ship of this size.

The build is simple overall as could be expected. It does however involve quite a few stickers which can always be tricky to align perfectly. Aside from this it shouldn’t really pose any problems for builders of any age.

The build and instructions are spread over three bags which really does seem a bit excessive for a set of only 247 pieces. However it all helps to ensure that the build can be completed by anyone who can follow the simple instructions.

The finished model overall looks pretty good. The low piece count of course necessitates that some short cuts have to be taken. The engine at the back consists only of a small red opaque dish and the windows in the front leave a pretty large gap to the body of the ship which unfortunately  look untidy.  However, the positives far outweigh the negatives. Firstly, the ship is an impressive size for the small piece count. It really feels large and weighty in your hand while still plenty strong enough to be played with. In fact, I would say it’s about the perfect size for whooshing around your house. The new style spring loaded missiles are also included on both wings, so attacking the womp rat or even larger enemies is certainly possible.

For adult audience, this clearly isn’t a display piece nor is the build interesting enough on its own. The Tusken Raider figure however is a must for anyone collecting Star Wars minifigures and is worth the price of entry by itself.

Overall then this is a really good value set which at £24.99 retail price won’t break the bank. This set can therefore be highly recommended as it offers a little something for everyone. Perhaps then the ideal solution for this set is a fair split of the Raider minifigure for daddy and a ship for ‘little Jimmy’!