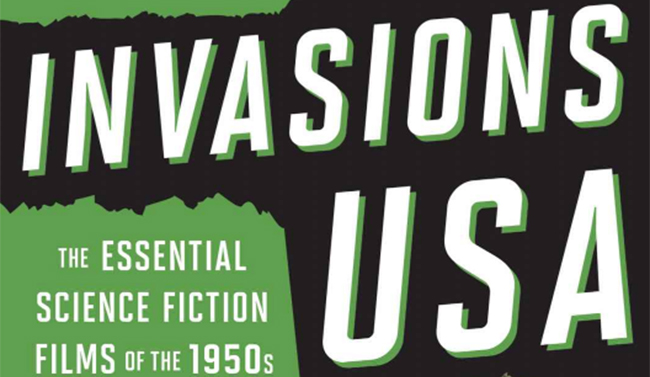 Invasions USA: The Essential Science Fiction Films of the 1950s

In post war America the political landscape changed. There became an anxiety about communism and in particular the hegemonious power of the Soviet Union. Cinema too responded to this with such films as the fantasy invasion film Invasion USA (1950) and the clearly paranoid Red Planet Mars (1952). Throughout the decade there were almost 200 science-fiction films made, some of which could be read as analogies of communist brain washing, a particularly divisive subject at the time of McCarthyism. In his book, ‘Invasions USA: The Essential Science Fiction Films of the 1950s’, author Michael Bliss rejects the often held notion that these films were propaganda tools dealing with American anxieties but rather focuses on sexual politics in such cult films as the colourfully titled I Married a Monster From Outer Space (1958) or about alienation (pardon the pun) in Invasion of the Body Snatchers (1956). In the footnotes of the book, Bliss also states that 182 science-fiction films in the 1950s belonged to the genre, while 20 of them dealt specifically with the notion of invasion, the subject of the book. In many ways this is a false statement for despite listing them all there were other notable exceptions, albeit B movies (which were also included in his list) such as the aforementioned Red Planet Mars, Invisible Invaders (1959) and Twonky (1953). Never the less the book does deal fairly with the subject. Elsewhere the book holds chapters that don’t relate to the book’s title such as Conquest of Space (1955) in a chapter that focusses on producer George Pal. Another film covered in some detail is The Incredible Shrinking Man (1957). The latter film is centered on a couple on a yacht when he becomes exposed to a strange radioactive mist. Over the next few months the man starts to shrink until he becomes miniscule and has to fight for his survival in his own basement against his own cat and a house spider. Despite being alien-like and other worldly at no point is it mentioned that this is an alien radioactive dust. Instead the author there is an emasculation of the principal character taking place, how he is literally becoming the little man to his loving and strong minded wife and blames the world for his problems rather than facing the challenge with strength and fortitude. This chapter is a clear indication of how the author views many of the films identified, that they are about the anxieties of post-war American relationships rather than the fear of the bomb or ‘reds under the beds’ so prevalent in a lot of writing on 1950s science-fiction.

Bliss does face the Cold War political climate as a reality in the chapter on The Day the Earth Stood Still (1951) where aliens Klaatu and Gort arrive in Washington DC and warn Earth that the proliferation of nuclear weapons will lead to disaster leaving Klaatu (Michael Rennie) no choice but to use all the power at his disposal to show his strength in bending the US government, the UN and the world that what he says is prophetic. A chapter on Invasion of the Body Snatchers (1956) shifts away from the popular held notion that the people being taken over by doppelgangers in alien pods in a small Californian town is a metaphor for communist brain washing with a different angle. Instead Bliss moves to the story about being an outsider in your own hometown, where everything and everyone familiar instead seems alien. Elsewhere another chapter centres on a film that is mostly seen as a silly B movie with a bombastic title, I Married a Monster From Outer Space, a film previously not given a great deal of attention. Never the less it is a smart and interesting study about the male figure seeming alien when put into a domesticated marriage and how he is unable to handle it. In the film the male in question runs over an alien creature which takes over his body and mind in which his wife soon suspects that he has been a changed man since their wedding night.

Arguably the best film covered in the book is the similarly colourfully titled It Came From Outer Space made by Universal and, like The Incredible Shrinking Man directed by the master director of the 1950s science-fiction film, Jack Arnold. Originally released as an early 3D process film the story has a mysterious atmosphere in which even the amazing locale of the Arizona desert comes to life, including the haunting Joshua trees. It makes the obvious references to Roswell and Area 51 and the numerous sightings allegedly reported from the Arizona/Nevada desert in the 1950s. This is the film with the most atmosphere and again Bliss takes the angle of alienation in an alien-like landscape the central subject. The principal character (Richard Egan) is a loner and an astronomer living isolated from the rest of the town in the desert. He appears very much in love with his girlfriend (Barbara Rush) from the Arizona town where they live. When a meteor crash lands they discover an alien spaceship buried deep in a crater. The strange alien inside takes over local people in order that they can repair their craft and escape. The trouble is none of the locals like or trusts the astronomer and are as hostile to him as the aliens once they have established that he may be telling the truth. Again the author makes the convincing argument that this is not about communist brain washing.

The book is a quick and easy read that rarely diverts from its subject, but perhaps only too easily is quick to dismiss social history and the political climate of the time in favour of gender politics. I would argue that the two are not exclusive to each other in the context of the time the films were made. It’s also unfortunate that one of the decade’s great and iconic science-fiction films, This Island Earth (1955) is not covered and merely just given a passing mention. ‘Paranoia: The Essential Science-Fiction Films of the 1950s’ may have been a more appropriate title.