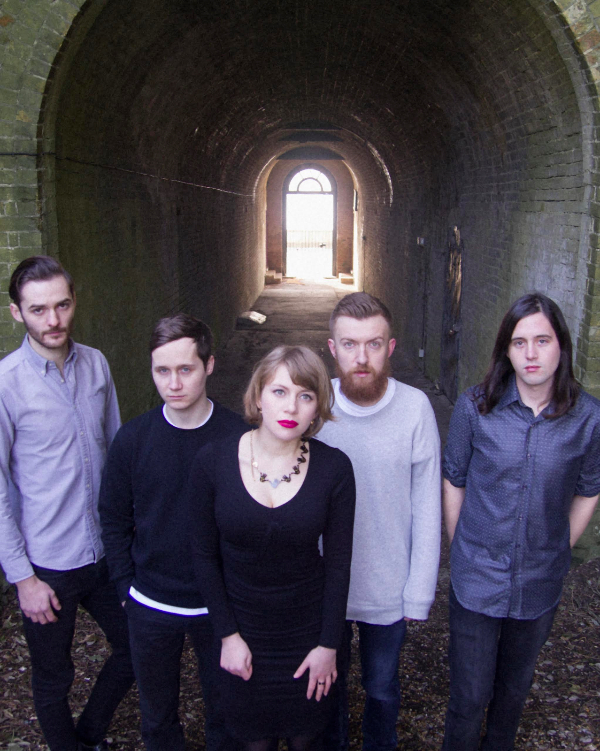 Released today via Holy Roar Records, ‘Grievances’ marks a welcome return for Rolo Tomassi that sees them achieve new and deserved highs. Sonically, it’s a further brave step into the unknown, taking their expansive and intellectually stimulating style into bold new territory. We caught up with vocalist and keyboard/synth player James Spence to look backwards, forwards and sideways at one of the UK’s most interesting heavy bands…

Hi James thanks for taking the time to speak to us – what are you up to today?

Its my pleasure. I’m sat at home its now pretty late in the evening and I’m just catching up on a few things I need to stay on top of.

Great to see you back after a little time away, how does it feel to be going full circle back to the label where it all started? There’s a pleasing symmetry to that…

Exactly. It feels great. Like coming home after a period of time away.

Eva [Spence, vocalist] said recently that she felt more enthused than ever by where you’re at as a band. How would you say the ups and downs of your career have shaped Rolo Tomassi as we know it today?

You learn from all your experiences, especially the bad ones. Its all about taking on what you’ve learnt and using it to improve what you do in the future. We are where are and I am who I am because of as many of the bad decisions I’ve made as the good ones and it feels like we’re in a good place, on the right track at the moment.

We noticed you mentioned that you had done some collaboration and switched up your writing process a little on the new album, how did you find being outside your comfort zone?

Really exciting. Its crucial for us to keep pushing the things that limit us so we can continue to grow and develop what we do as a band. I learned a lot from our friend Jon, who helped with the string arrangements, that I can take into writing new music and improve how I do it.

I think it’s fair to say you’ve never been described as an easy listen, but is there any aspect of deliberately avoiding accessibility to your writing, or do you think your music is the unavoidable product of what seems like an unrestricted creative process?

Maybe when we were younger there was more of a concerted effort to be awkward and avoid accessibility but not so much anymore. Now I find the idea of of deliberately doing that kind of dull. There are still elements that some people would find difficult to listen to but thats more down to a matter of taste over anything else.

There’s always been a strong element of experimental structure about the band, but on new tracks like ‘Raumdeuter’ and ‘Opalescent’ there feels like a real step towards a kind of cinematic soundscape approach rather than “straightforward” songwriting – can we expect more of this in the future, and is this an aspect of writing music that you particularly enjoy?

Absolutely. Those songs capture a lot of what we were going for on this record. Something bigger with more melodic qualities than we’d maybe had in the past that move as pieces of music rather than ‘songs’. Im not exactly sure what we’ll do next yet. We’ve not stopped writing though.

10 years is a relatively long time for an independent band like yourselves to stick it out, what do you think the secret to your longevity is?

Its genuinely just my favourite thing to do. Its what I enjoy the most and I still get so much out of it. I consider myself incredibly fortunate to have found an amazing group of people on a really similar wavelength. I don’t think there’s a secret.

In terms of the themes you explore through your music and lyrics, would you say there’s been a traceable progression from the early days to the latest material, or a desire to address particular things that you’ve deliberately set out to write about or express?

Lyrically its always been fairly autobiographical. In the past I think we hid before loose metaphors a bit more but now I’d like to think the lyrics are a lot more honest and up front. Musically, there’s definitely a noticeable progression. To me, you can hear how young we are in the earlier stuff. It sounds a lot more playful almost. I would like to think we haven’t lot any of the energy we started with, its just focused differently. The newer material is a lot more considered with a more tactful approach to dynamics and the use of the technical side of what we do. That being said, I still feel that you can hear its the same band across all of the releases. Its just gotten better as we’ve grown into it.

‘Chandelier Shiver’ is probably my favourite track on the record – interesting to note that it’s an instrumental track with no guitars – do you ever feel constrained to work with your standard set up of instruments/line up? Are guitars something you see as central to your sound or do you like fluidity between instruments is important?

I don’t ever want the music we write to be limited by the idea of having to recreate it live. With this album more than any before we went into writing and into the studio with that in mind and it makes writing feel limitless. Chandelier Shiver won’t be a mainstay in the set. We might never play it live. But it works exactly as intended in the context of the record which is the whole point. I want our studio albums and our live shows to be entirely separate entities.

The music industry can be notoriously brow-beating for those with good intentions. I’m interested to know whether it’s been difficult to hold on to your integrity at certain times, or whether you’ve ever considered doing something you weren’t 100% comfortable with for the sake of your career?

Nothing immediately comes to mind. There are things that I wish we’d maybe done differently but none of it has been particularly detrimental to where we’re at (or could have been etc.) now.

What do you hope you’ve managed to contribute to the UK music catalogue over the lifetime of the band?

I think that’s the sort of question I’d consider more when I knew things were reaching an end. I still very much feel that we have a lot left to accomplish as a band musically and even at 10 years in, we’re still figuring out exactly what our contribution is or could be.

The new record has a very melancholy and reflective tone that feels strangely relevant sitting in David Cameron’s England contemplating the next five years – do you think artists have an obligation to use whatever creative voice they have to address audiences and widen discussions on social issues?

Maybe not an obligation to use their creative voice but definitely to recognise the platforms they have to use address issues they feel strongly about. Remaining quiet on social issues is something I feel I’ve certainly been guilty of when its come to our band and whilst there aren’t any political themes running through our lyrics, there’s definitely a core of moral and ethical values we share we share as a group. In light of recent events, more than ever, I feel like we need to start championing them a bit more.

‘Grievances’ is out now and available from http://www.holyroarrecords.com/