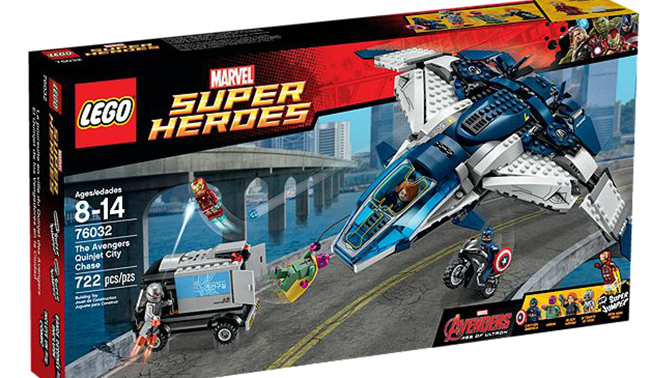 The Superhero genre of Lego sets has always suffered from the basic problem that the comics and movies are really all about the characters themselves and iconic vehicles like the Batmobile are rare. Minifigures tend to be the stars of the sets, but this causes a problem when you want to create the larger sets. Even if they included 10 minifigures in a set, there still has to be something significant to build to warrant the price tag.

For the Avengers Age of Ultron line in 2015 Lego has pulled out all the stops to come up with a  solution to this problem. The smaller sets have interesting figures such as the Mark 45 Iron Man (76029) or the amazing looking Hulk Buster (76031). The mid range has the Stark Tower (76038) and the Quinjet to build and at top of the range we have the gigantic SHIELD Helicarrier. The Helicarrier is clearly a collectors display piece, so the top of the range for the normal line up is the Avengers Quinjet City Chase.

Due to the shortage of recognisable vehicles in the Avengers movies, it is no surprise that this is not the first Quinjet Lego has released. The Avengers line in 2012 also included a version of the Quinjet (6869) at exactly the same price point and with almost exactly the same piece count. Rest assured though, these are not the same sets. The building techniques and pieces used have evolved a lot in the last three years and there is no doubt the new Quinjet is the better looking version. The only thing that might bother fans with the new version is that it seems to be based on some concept art created for the Captain America Winter Soldier movie. The old version was gray with engines on the tail fins, like they appear in the movies. The new version is much sleeker and futuristic with a blue and white colour scheme and therefore does not appear like it does in the movies.

The minifigure line up as you would expect from a superhero set this price is again impressive. The Mark43 Iron Man is a new figure for the line up but appears in three of the sets released this year. The main upgrade is a little added printing on the helmet part which does look very good. The body and leg printing is also a little different from the previous versions but only really enough for collectors to notice.

The Ultimate Ultron is one of three variant Ultrons released across the 2015 sets and exclusive to this set. It is also the best looking of the three with a two piece helmet design over a translucent orange head piece giving it a suitably menacing look. The lower half of the helmet is the same as in the Ultron Prime figure in the Hulk Buster Smash (76031) set, but in that figure the top of the head is printed. The helmet design on the Ultimate Ultron really adds to the figure making this the definitive version of Ultron to date.

Captain America is also a new figure for 2015 but is not exclusive, appearing in the Hydra Fortress Smash. The same body printing also appears in the SHIELD Helicarrier, but in that set he is appearing without his mask but with a hair piece instead. The colour of the suit is back to the darker blue of the 2012 Captain America’s Avenging Cycle (6865) set but the printing has significantly increased in detail on both the head and the body parts.

The Vision figure is a first appearance for this superhero in Lego format. The costume of Vision is very much the movie version Paul Bettany plays in Age of Ultron in look, although the green of his suit is a little off compared to the movie. The base colour of the suit is the Lego ‘Sand Green’ which doesn’t really look like the movie version or the comics. The head of the figure is purple with printed details, but this does not therefore incorporate the green hood which should cover his head. The detail on the figure and the new style yellow cape look really good though and all in all this is a nice addition to the Marvel Superhero line up.

Finally we have Black Widow. This is a second iteration of Black Widow, the first one having only appeared in the previous Quinjet set from 2012. The figure is not exclusive to the set this time though as it also appears in the SHIELD Helicarrier set. While the first version had long hair, the new hair piece is spot on to the shorter hair Scarlett Johansson has in Age of Ultron. The body printing has also changed although the suit in general is the same.

The Avengers Quinjet City Chase has really tried to pack in a lot of play features to the set. Not only do we get the five minifigures and the Quinjet itself, but included is also a small van and a Avengers themed motorbike for Captain America.

The van and the motorcycle start off the build and are both very simple in design. The motorcycle is a new design for Captain America at least being a very modern street bike type as opposed to his previous old style vehicles. The van has some play features with a mechanism at the back blowing the rear compartment open and revealing Vision’s pod.

The Quinjet itself is surprisingly large and heavy for the piece count. The initial build concentrates on the body, including a clever play feature which allows the cargo hold doors to be opened by a button press from the top of the aircraft. The hold is designed to hold Captain America’s bike so that he can be released when needed. There is also a smaller area at the back meaning the rest of the Avengers can travel within the ship as well. The build of the body is followed by the wings which are fairly straight forward.  The left wing has an extendable cannon featuring a double stud shooter. The design of the shooter which incorporates hand weapons used on at least some Star Wars figures is very nice looking, though rather fragile. Trying to extend this down from its wing compartment often results in removing the whole cannon. The right wing also has a play feature where a minifigure can be stored holding onto a rope and can also be released by pressing one of the Avengers signs on the wings. This is a pretty cool play feature, though annoyingly there is no option for stowing the rope away so it always seems to hang down from the hold unless removed completely from the set.

The cockpit is a pretty nice if plain design that can accommodate one figure for flying. The hardest part of the whole build is probably attaching the cockpit sticker in the correct position without creating unsightly air bubbles. The final stage is adding some wheels underneath the ship. While the front wheel is a nice airplane nose-wheel type, the rear two don’t really suit the ship well. However, they do add playability to the ship meaning it can be pushed around on the floor and they are easily removable if the set is used for display.

The set is also crammed in with play features and as ever the quality and selection of the minifigures is excellent. While at £69.99 rrp the set is not cheap, I still think it represents very good value for what you get.

The Quinjet and the minifigures also definitely look good enough for display purposes as well, so this is not just a playset either. Definitely a set that would be popular with any Lego or Marvel fan.