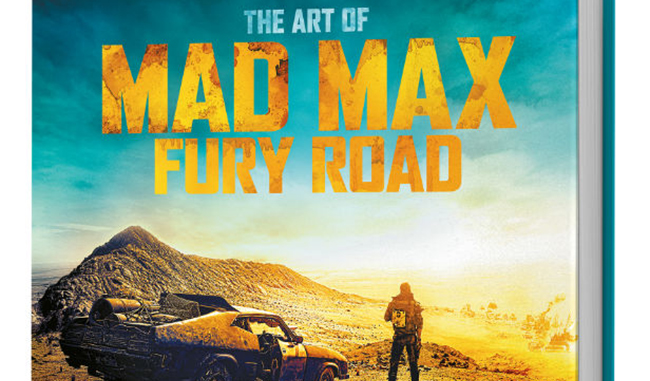 Titan Books tend to pick very wisely when it comes to publishing books of this nature – The word on the cover that is the most import being “Art.” What we want to see are sketches, designs, and as much production work that can be mustered into showing off just how the “Art” was brought into physical existence. And this could well be one of their best efforts so far.

So what can we find in this book?

A George Miller introduction, and a very, very passionately written one at that.

It’s well worth reading this short piece by the director as it will help fuel the mind when looking at what is to follow.

Like many ART of books of this nature we get a look at Vehicles from inception designs to what was used in the film. Costume and character designs. A nice story about how they found the old jacket (covered in mould) that Gibson wore so they could design the new one.

Anyone familiar with the film will also get a nice look at the extensively written tattoo that Max has forced upon his back. There are also plenty more looks at a lot of the “blink and miss them” details about the world created. A closer look at the Citadel, but also we are given closer looks at Bullet Farm and Gas Town which we either don’t see at all, or barely see in the film.

Fury Road is in no short supply of character designs, costumes, vehicles, weapons, sets and scenery. And there is much in the way of art stills, sketches (and the expected on set photos).

But there is a short amount of damnation to be found with this book. This was perhaps a chance for the “Art of” editions from Titan to really push their boundaries further and really delve deeper into the production of a film. It does feel like it’s skimming the surface in places. As a movie tie-in release it’s still a very good read, but we know for sure that out there – there is a stronger, longer and more in depth story to be told in words, and certainly in pictures too. Hopefully the success of this book which is worth every penny will open doors to justifying a future release.