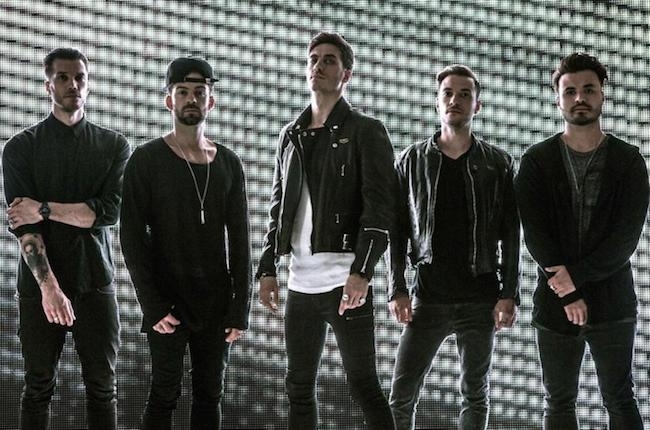 After their huge sold out show in London recently, Young Guns headed north of the border to Scotland for the penultimate show in Glasgow on their long awaited UK headline tour. While they were there, Glasswerk reporter Laura Johnson got a chance to catch up with front man Gustav Wood to get his thoughts on their homecoming show, their brand new album, Ones and Zeros, and how memories mean more than things…

Yeah, we got here about an hour ago. We’re all a bit bleary-eyed because we played in London last night so we had to drive from London to here. We drove until about 4am and stopped for some sleep then got up at 8 and continued on our way.

You’ve only got a couple of shows left; how’s the tour going so far?

Very well, it’s been a lot of fun. This is the first headline tour we’ve done in the UK since maybe October 2012 so it’s been quite a long time and it feels really nice to be home. We have toured a lot since just not in Europe. It’s always a great feeling to play shows, let alone sold out shows, and the songs are going down really well and everyone is very happy. It’s lovely.

What’s been the highlight of the tour so far?

Well, obviously the album came out yesterday so that’s a pretty significant thing for us. We have been waiting for it to be released for quite a long time and the release fell on the day of the London show which, of course, is where I’m from. So, to play a sold out, home town show in a venue that I grew up going to see other bands play in on the day of release of our album felt pretty significant to me and it was also the best show of the tour.
It was a crazy good show. The crowd were loving it; singing every word back to you.
Thank you. It felt really good and I actually felt like the new songs were going down better than some of the old songs. For songs to be so fresh and for that to be happening felt really encouraging.

Tell me a bit about your new album, Ones and Zeroes.

It came out yesterday and we’re very proud of it, of course. We’ve been super anxious to get it out. We recorded the album at the end of the summer last year so obviously we’ve had it for a long time. We wrote some of the songs for the album, perhaps a year and a half before that so really we’ve had it for an awfully long time. I think it’s definitely safe to say that, I’m probably a little biased here; it’s our most consistent record. I think it’s got the best songs that we’ve written on it. It’s obviously a bit of an evolution for us in terms of the sound of the album but I think when you have a three year wait between albums it’s probably quite natural for that to happen. I think we’re just really excited. It’s a more mature, more interesting, more unique version of the band that we were before and we’re thrilled with it. I’m glad it’s out and I’m glad it’s being received well.

How does it feel sitting on all that material for so long?

Well, to be honest it’s quite frustrating because you’re kind of stuck. You can’t move on because you haven’t completed that stage yet, but we actually have completed it because we’ve written and recorded it. So that’s really unusual but that stems from the fact that when we released Bones at the beginning of 2012 at home we then toured it for just under a year. That’s when we would have begun writing the new album but instead we released it in The States and because the first single went to number 1 on the radio we ended up having to tour a lot over there. Which is a fantastic problem to have of course, but it just pushed everything back. You know, you can do a twelve month album cycle over here or in Europe but you can’t do that in America because it’s just too large. We had to keep going back and back and one single takes six months over there. It’s been kind of odd because in one respect we’ve been stuck in the past promoting a record that we wrote at the end of 2011 and so we’re anxious to move and write new music but we’ve had to be practical and wait and see out the campaign over in The States. It was frustrating to have to sit on the music for so long but that’s the way it goes and it’s out now and that’s really the only thing that matters.

We’re you nervous about the gap between releasing your albums?

I don’t know if nerves is the word but I think we were definitely aware of the fact that things have changed. We live in a very transitory time now where things don’t last long and attentions shift quickly and people’s attention spans are shorter than they used to be. Patience is probably shorter than it was as well. So, as a band you want your fan base to remain and be with you and support you but at the same time you have to be aware that things change very quickly nowadays. We were certainly aware of that fact and we kind of view this as a bit of a re-birth in some respects so we haven’t been nervous, we haven’t been afraid of that. We have a job to do and that job is to build our audience back up and also connect with a new audience and that’s quite a thrill actually. It revitalises us and we feel like a new band again.

What’s the best present you’ve ever been given?

Two years ago my girlfriend threw me a surprise birthday party and that was probably the best present I’ve ever received because that’s not really in my nature. I don’t tend to enjoy large things like that. I feel, perhaps oddly for someone that’s a singer in a band, not that comfortable with all the attention being focused on me like that. I was shocked but there was a room full of people; all the people I work with, all my friends, all my family where there and that meant more to me than any present. I was stunned by it. That was lovely. I bought myself a motorbike a couple of years ago that was a great present to myself. That’s definitely up there. In terms of presents from fans we’re quite lucky. We get given quite a lot of stuff. I always feel guilty about it and I always say “you mustn’t spend money, just come to the shows” that’s all we want but people bring us bags full of treats and they make us a lot of things. That always has a lot of value, I always appreciate that.

What do you do with your gifts from fans?

I try and keep them all. I try and keep them in our practice space. We have flags that people give us. People from different countries come and give us flags that they’ve signed and drawn on. I think it’s really cool to keep those because it’s a nice little memento of different places we’ve been and places that people have come from to see us. I think that’s always quite awesome. We try and keep everything. It doesn’t always happen because on tour you tend to lose your own belongings let alone things people have given you but we try.

If you were stuck on a desert island and could only take one book, one album and one luxury item what would they be?

I suppose growing up, probably, my favourite book was Lord of the Rings. I read it when I was very young. My mum taught me to read actually, just before I started school and we used to read that together. I read it a lot growing up. I love that book. I read a series of books not too long ago called The Dark Tower. It was by Stephen King and I absolutely loved that. So, if it’s not cheating I’d take that series but if I wasn’t allowed to do that, then I would probably choose… For some reason Lord of the Flies was always a book I really loved. I studied it when I was a kid and have read it like 20 times since then so maybe that. For my album I would probably pick Lateralus by Tool. It’s not necessarily my favourite album of all time but I never get bored of listening to it. Luxury item would be soap!

If you could remove one word from the English language what would it be?

Bae, it would be bae. It’s the stupidest thing in the world.

If you could take credit for anything in time what would you choose?

I will go for… probably the most significant thing I can think of… what would that be? I’d pick the invention of penicillin, which would be fucking ironic because I’m allergic to it.

One last question before you get on with your day; hamster sized rhino or rhino sized hamster?

Ones and Zeros is out now and you can see Young Guns at a selection of festivals this summer.