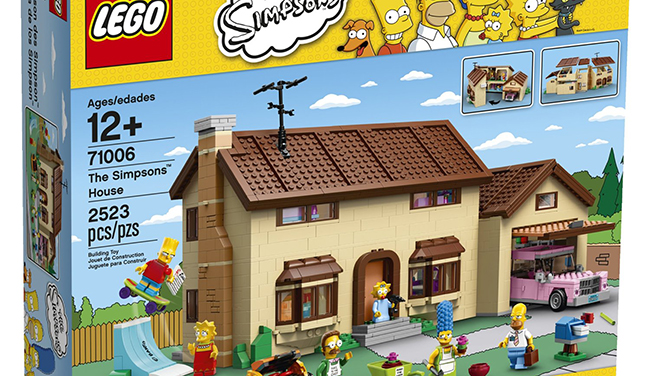 I’m sure by now the theme tune is already playing in your head. Yes the Simpsons make their way to the big time (after over 25 years of the show on TV) to the official LEGO sets. And first up is one of the obvious places to start – the Simpson’s House.

Joygasm is the preferred word of choice here. Filmwerk spent a few evenings on this beauty – savouring every layer of the LEGO build. And we divided the work between two people which proved to be all the more fun. Also helps if you put the show on in the background if you have access to it.

You start with the car before moving onto the garage. After this you naturally begin to build the foundations of the house and then room and wall at a time build up to the upper level and finally the roof.

This is not a very technical build. In fact after you have your base plates down, it’s all fairly straightforward. Being such a colourful set (Pink car, Brown roofs, coloured carpets) it’s easy to distinguish the pieces from one and other, which makes it all the more attractive to build. And with all of the floor space being smooth, it isn’t too much of a burden on your finger tips. But at over 2500 pieces it is still hardly a fast build – but it is the most fun we have had building a LEGO set ever as it isn’t bogged down by moving parts or skeletal inner structures.

Ok so if we want to get critical then the actual layout of the house does not pose any symmetry with the house form the cartoon. Sure the lounge looks familiar with the wall art, the couch and the TV but the room itself is on the wrong side. This is down largely to the fact that the designers have kept the bottom floor to the lounge and kitchen only and have down away with the two other rooms that exist. Ok so if the house was the actual size compared to the mini-figs you would be talking probably almost double the amount of LEGO bricks. But that would not have been any bad thing.

But as it stands, it’s a fine looking, if inaccurate set. The details within the reconfigured space is however very accurate.

What stands out about this set though is not the building itself, or the ample mini-figs given. It is the detail put into it. The little extras like the deck chairs, the barbeque, the decoration of the rooms, and the car. Adding all of these items into the set really bring it to life.

The cartoon world probably could do with more of a visit from the LEGO world. This one is a joy from start to finish. There will likely be more Simpsons sets to come (The Kwik-emart is already on shelves) but we also hold out hope for a bit of Futurama as well!