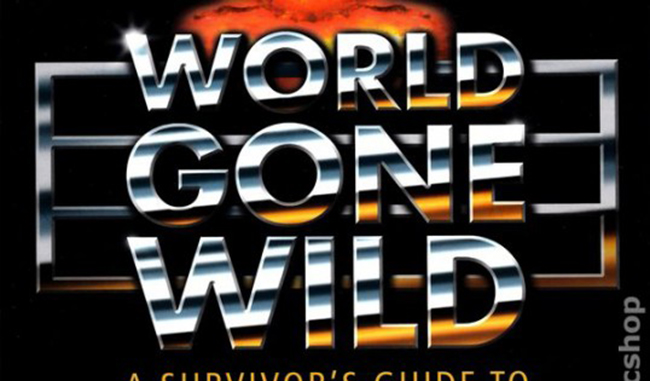 Mad Max Fury Road has help give the Post Apocalyptic movie sub-genre a well earned boost to the arm. The 2000’s is seems have been slightly deprived of the genre. Ok so we have a lot of Teen-Dystopian future movies (ala- Hunger Games). But the proper Post-Apocalyptic stuff seemed to have been shot down in the 1990’s. And Kevin Costner seemed to be the actor that was (very unfairly we might add) given the blame after the semi-disaster that was Waterworld (Seriously people. The film is actually very good, and the film didn’t flop half as bad as people think. It made its money back so let’s move on!) and also his own self-directed feature The Postman (Ok that one you can call a disaster on all fronts!).

Author David J Moore though has plumbed his thumb deep and sought out every imaginable movie even slightly related to the mad future that may be with this very hefty text and full colour photo filled book that chronicles in A-Z fashion each film.

Each film is also given a new Star ratting that the author has invented. (Essentially it’s the 5 star rating system, but for fun he has used levels of Toxicity instead). This is all swamped over in the authors introduction. But there is also a nice little forward by author and online film critic Vern (who knows a thing or two about action movies).

As for the author and his comments on the films – Yes this is clearly a fan who may be a little bit too easily pleased. Just look at his entries for each of the Mad Max films – you don’t have to look far to find people who rate the three films very differently from one another. But for this reviewer to give all three the highest rating each seems a bit weird and self indulgent and therefore makes it harder for readers to trust the rating system when the author has no barometer outside of their own geek-dom.

But one cannot deny the level of research here and the facts on display (not to mention the colour photos!). Quite frankly this is a guide book that fans of the sub-genre really need – just for the sake of finding films out there that they may or may not have seen before. That someone out there has managed to not only see all of these but catalogue them in this amount of detail is a film buffs dream come true. Also into the mix you get several interviews with some of the talent behind some of the films.

Anything even remotely end of the world related gets a look in. And not just high budget, or 80’s Mad Max rip offs, but all of the low brow titles you are likely to have never heard of down through the past few decades get covered (yes Albert Pyun fans – He even gets his own index).

Speaking of which – At the end there are several A-Z that list the sub-generes of the, er, sub-genre.  So this gets broken down into even deeper levels that include the likes of Aliens, Creatures Features, Cannibals,  Cheap as dirt movies, Chop Sockie,  The Chosen One, Comedies, Cyberpunk etc.

It’s amazing that even in the pages that have A-Z lists that they still find space for colour photos to keep you leafing through, staving off any boredom the eye might find. This is a real film nerds collects item written by one, for the many.

This is time well spent on a great book!