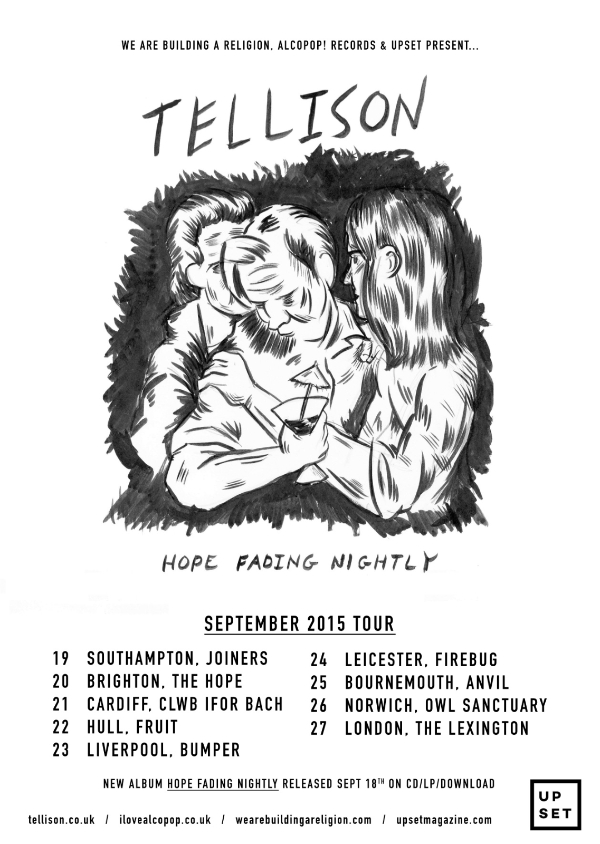 Track of the Day: Tellison – Boy

Praise the lord of alt-emo, Tellison return with a brand new album, single and tour dates for September starting with a whopping tune in new single ‘Boy’.

The band release their brand new (3rd) studio album ‘Hope Fading Nightly’ through Alcopop Records on 18th September alongside an intimate set of UK headline dates around the album release.

As joyous as it is wistful, ‘Boy’ is a romp through teenage arrogance and the power of hindsight that stops off in The Weakerthans camp for a quick fumble behind the bike sheds with Biffy Clyro and a spliff with Pinkerton-era Weezer.

Out now, the nostalgic heart-break anthem will be released on Instax instant photographs mounted on TELLISON postcards with a link to a free download. Every photograph and thus every version of the single will be unique and unrepeatable, so you can stash in that memory box with all the letters from your ex that you’ll never read again for fear of a relapse.

The band had the following to say about the single:

“The main theme is evidently thinking about the things you did when you were younger – what meant the most to you, how important those things felt – and how you feel about those in retrospect. In this case, I looked at a relationship that busted me good. I’m sure you guys will have had the same experience – where you’re pretty sure you’re like “this is it” and it turns out that it definitely wasn’t it. Those things affect you for sure; so the question I asked myself when writing this was how relevant that should still be to my life now?”