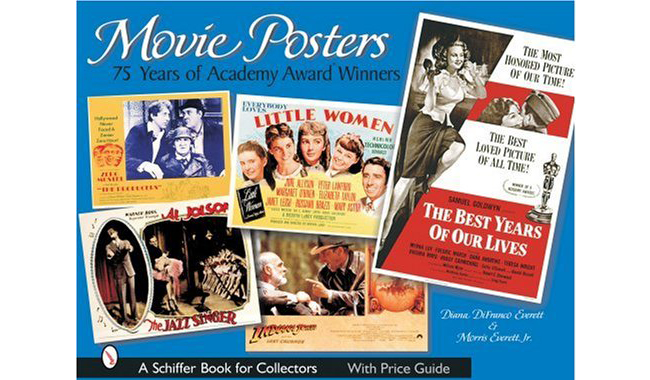 We are no strangers to movie posters here at Filmwerk, or book son movie posters – and with this volume we look at designs for films that have won the Academy Award: From the Awards inception of 1927 right up to the turn of the century

The book is actually simplistic in its intentions. You get a couple of pages of text introducing the title (The usual Forward, and Author notes etc) and then the pictures takeover the rest of the book.

Now the book doesn’t just pick films that have won the Best picture Oscar, rather it opts to select random categories that have won Oscars for various departments. The awards won are listed next to the image. Oddly though we are not always treated to a poster from the film. Sometimes, instead, we are given a promotional picture or still from the film instead which sort of contradicts the tile of the book.

More often than not we are treated with to up to 4 films per page making the images not very big either, so this book is not exactly here for the analysis of designs either. It’s much more of a collection of images that one might slot into a photo album.

The design and layout of the pages are fairly basic. There is no love given to the content here making it actually a fairly dull page turner. If you are interest in random winners at each year of the Oscars then you might gain some interest in leafing through.

This title might work well as a coffee table item but even in that capacity would probably need to be a bigger production with much larger images, pages and general content.