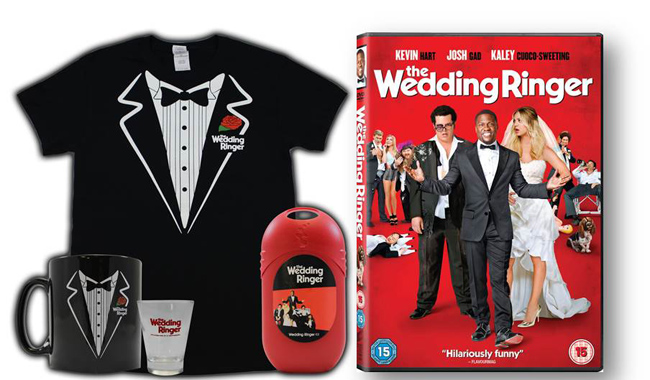 The hilarious comedy THE WEDDING RINGER is out on Blu-ray™ & DVD July 6. To celebrate, we’re giving away three goody bags containing a Wedding Ringer hangover survival kit, T-shirt, shotglass, mug and copy of the film on DVD.

Kevin Hart (Think Like a Man Too) takes wedding planning to a whole new level of hilarity as the “Best Man” money can buy. Doug (Josh Gad, Frozen), finds himself without a main groomsman only two weeks before his wedding to Gretchen, played by Kaley Cuoco-Sweeting (“The Big Bang Theory”).  Given his time crunch before the big day, Doug hires Jimmy (Hart) to fill in, and an unexpected friendship develops.

To mark the release of this we have some goodie packs to give away as well as 3 copies of the Blu-ray/DVD to give away to three lucky winners!

To be in with a chance of winning have a look at this easy question:

What is the name the upcoming film that Josh Gad co-stars in?

Send us your answer along with your postal address to editor@filmwerk.co.uk.