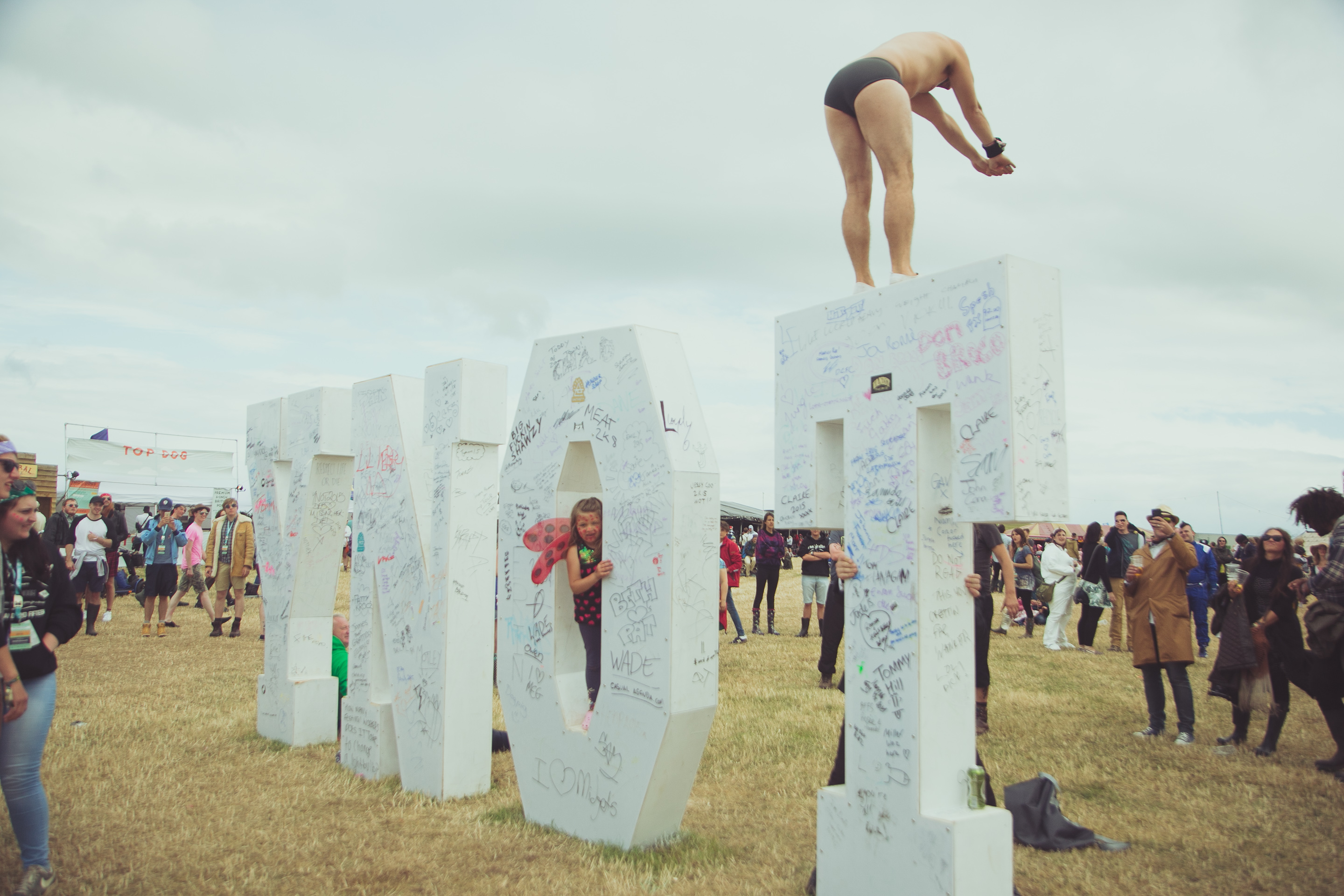 A decade’s existence is a big achievement for any festival, especially for one that manages to keep its capacity limited and vibes family friendly whilst attracting the likes of Snoop Dogg and Primal Scream to its billing. Therefore, it came as no surprise to hear that tickets for Y Not Festival 2015 were sold out two days before gates were set to open. Having never been before, it was time for Jennifer Ho to pack the ciders and notebook to see what the fuss was about.

After slight delay getting to the site on Friday due to missing the festival shuttle bus and relying on the Peak District’s limited public transport instead, the view of tents and stages glimmering in sunshine was a sight for sore eyes.

First up is Rag’n’Bone Man over at The Quarry stage. His mixture of soul, funk and hip hop would prove to be a unique sound for the weekend of guitar laden tunes. The band gives an energetic and sermon-like performance to a captivated crowd, despite the large tent pole blocking the centre view of the stage. Rory Graham’s voice rumbles and roars as he goes from almost soaring falsettos to growling anger with ease. A cover of Mary Mary’s ‘Shackles (Praise You)’ has people swaying with approval, with the necessary hands and imaginary shackles in the air.

If the ratio of booze thrown in the air is directly related to how ‘party anthem-y’ a band are, then Reverend and the Makers are indeed the heavyweight champions of getting the party started. Jon McClure has the crowd bouncing on command, and concludes the boisterous set by reminding everyone to ‘Have a good weekend, and don’t be a dickhead’. But with most of the crowd smiling through the unsolicited beer-shower, there is nothing to worry about.

Back at The Quarry, Public Broadcasting Service turns out to be family friendly fun. This wasn’t a place for enthusiastic head nodding – scores of mums and dads with their youngsters dance along enthusiastically to the band’s electronic, cosmic-inspired tunes. Less Than Jake follow on the same stage – the acceptable adult’s version of Don Broco. With their sound of retro pop punk, there is a smidgen of anarchy in the air as a reveller manages to climb his way up on the rigging despite it being wrapped in plastic. Power to the people.

Of course, the highlight of Friday is the performance of Snoop Dogg on the main stage. There’s anticipation in the air as a huge crowd gathers under the light of a full moon to see the iconic rapper in action. Despite arriving 15 minutes late into his one hour set, Snoop Dogg gets the crowd immediately going as he blasts through hit after hit. There’s a mixture of collaborations (Katy Perry’s ‘California Gurls’), covers (House of Pain’s ‘Jump Around’) and original classic hits. It’s a beautiful thing when people – both young and old – cheer enthusiastically when being encouraged to smoke weed everyday. Snoop appropriately finishes off his set with a cover of Bob Marley’s ‘Jamming’, assuring us: ‘I will be back to Matlock UK motherfuckers.’

A grey and drizzly Saturday starts off with Allusondrugs at the Giant Quid stage, the tent for all things loud. With their art-school drop out looks and 90s grunge sound, their palpable energy is infectious as it bounces its way throughout the packed out tent. The band ends their set by encouraging the crowd to shout out ‘herpes’. This in-joke is baffling as it is slightly humorous.

On the same stage sees Bo Ningen yap, shriek and riff their way into one ferocious wall of sound. Bassist and vocalist Taigen Kawabe commands the crowd with his voodoo-like hands as each band member’s wild long hair whips about as if it’s an acid rock version of a shampoo commercial. Watching Bo Ningen perform is as mesmerising as watching a professional chef chop onions: the frantic skill is hypnotic.

It’s a feel good Saturday night as New York indie-rockers We Are Scientists perform their mid-noughties hits alongside their equally catchy recent work. The tent is undeniably heaving with energy. A friend goes crowd surfing three times, only stopping after he is threated with being kicked out by security. A more welcomed attempt is seen by a pineapple, as it bounces its way through the crowd towards the stage. Eventually, it ends up in the hands of front man Keith Murray, who holds it up to a cheering crowd. Better to be adored than in a piña colada, I’d say.

A lazy Sunday starts off with Ben Haynes at the cosy Hog & Barrel stage and bar. His gentle voice and acoustic guitar is soothing and reassuring – the perfect thing for a hangover. With bundles of hay for seating and barrels for tables, the venue itself is ideal for chilling out. The only gripe is the large barrier in front of the small stage. Surely a stage invasion isn’t going to happen in an acoustic tent?

Following on from the theme of relaxing, King Pleasure and the Biscuit Boys – the self proclaimed kings of boogie woogie – bring their feel good tunes to a sunny mid afternoon. It’s entertainment you don’t need to stand up to enjoy, though it’d probably be better if you did. The double bass player is full of character as he swings his large instrument around in the air. A giant conga line forms with the song ‘Tequila’, and the band’s cover of ‘Bouna Sera’ manages gets a young couple to kiss for a cameras.

Old fashioned rock and roll gets a youthful reincarnation from The Strypes, also on the main stage. These boys have a confident stage presence that transcends their years. Their vintage inspired music is energetic, stylish yet contemporary – however it’s mainly dads doing the dancing. Back at the Giant Squid, Rolo Tomassi bring their mathcore to a heaving crowd. It’s a mixture of curious onlookers and clear fans. As Eva Spence’s vocals see-saw from brutal screaming to angelic singing, a group of girls towards the back of the tent exclaim, “Holy shit, is that a girl?”

The family festival atmosphere of Y Not is undeniable. Usually, the sight of a young woman on someone’s shoulders blocking one’s view would be deemed an annoying inconvenience. When it’s what seems to be a 5 year girl enjoying Nine Black Alps, that’s to be encouraged. Having given up on getting a decent vantage point and making do with joining the tent overspill instead, all that can be said is that people looked to be having a great time.

As Sunday edges closer to the final acts, there’s that sense of impending reality about. Everyone seems to be squeezing in their last bit of fun, especially the herds of zombie-like revellers covered in paint walking aimlessly about. I take a solo 16 year old under my wing as she’s opted to see Johnny Marr by herself rather than join her mates at the rave tent. I reward her independence with a pint. Whilst the guitar maestro manages to get lots of appreciative head nodding for his solo work, it’s The Smiths singles that really engaged the crowd. Tracks such as ‘Panic’, ‘How Soon is Now’ and ‘There is a Light That Never Goes Out’ gets a mass-sing-along going, as well as Marr’s rendition on The Clash’s ‘I Fought the Law’.

Closing out the festival are Primal Scream. Numerous things are thrown in the air, from a rubbish bin, blow up mattress to the usual offering of hands and pints, all adding to bittersweet ‘this is the end, anything goes’ atmosphere. Rock music in its various forms – from psychedelic, pop and hard – are nestled together as people got their rocks off.

The great thing about Y Not is its intimacy. The stages are just a mere hop, skip and stumble away should something not take your fancy. The strong independent ethos is evident also. All the food sampled is stodge-free, with plenty of vegetarian options available. A cold pint from a bar in a field turns out to be same price as one bought in a city centre pub.

Reasonable, fun and dickhead free. Happy 10th birthday, Y Not. You’re growing into a beaut of a festival.