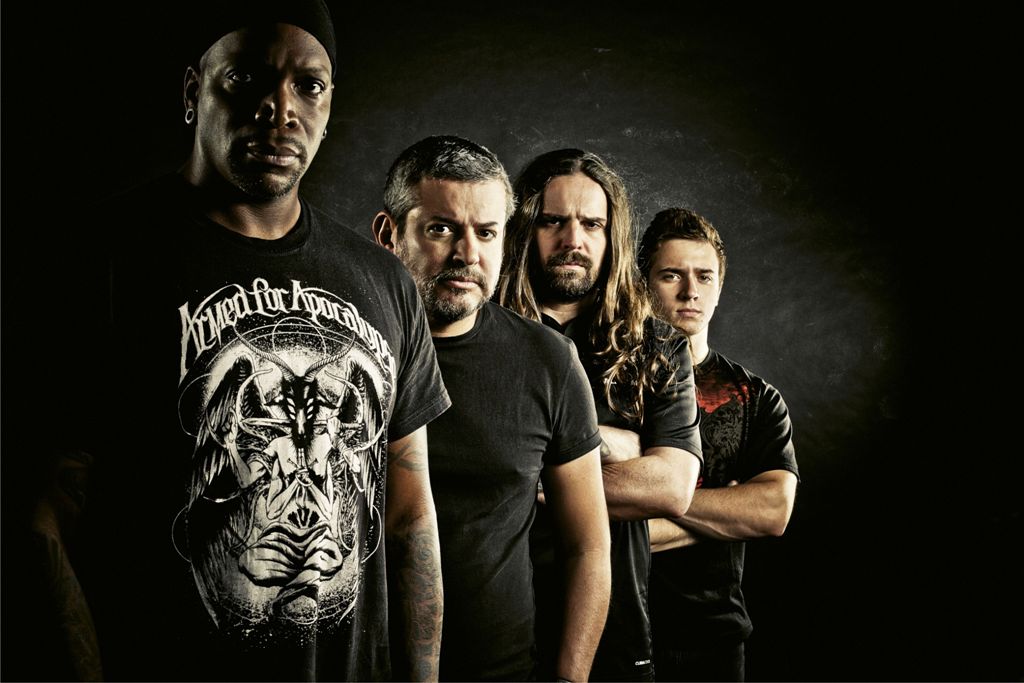 Sepultura – a band now in their 30th year – are cruising round the globe celebrating. 30 years for any band is a big deal, but for a metal band it feels even bigger; a band that has been through the dreaded vocalist change and emerged reasonably unscathed is pretty unbelievable, but here they are in a tiny sold out show in Chester and two nights before they’re on the main stage of Bloodstock Festival.

Two pretty reasonable support acts in Grind Horizon and Lazarus Syndrome play to a half empty venue and I admit I thought that this was going to be a cruddy turnout for the metal legends, but five minutes from stage time the venue fills to capacity just as Sepultura emerge from the smoke and shadows and burst into 1986’s ‘Troops of Doom’.

Besides Paulo Jr. looking a little greyer you couldn’t really tell that 30 years has passed by. Andreas Kisser bangs his head to every note, screams every word to himself and darts around giving the audience high fives at any given opportunity. Eloy Casagrande ploughs his way through song after song at a blistering pace. He’s fit into the massive shoes of ex-drummer Igor Cavalera just fine. Derrick Green is a huge presence, both physically and in terms of frontmanship – he talks with the audience a lot and noticeably enjoying the intimacy of the show too.

Prior to the show I’ve been reluctant to see Sepultura after the split with Max Cavalera. I just didn’t enjoy Derricks vocal, didn’t think he could replace Max whatsoever. I’ve turned down numerous opportunities to go see Sepultura in recent years because of this stubbornness. As ‘Propaganda’ rings out across a sea of sweaty faces I realise that I’ve been a f****ng idiot to miss them. Derrick nails the vocal from beginning to end and there’s a distinct moment where I think to myself – “This is better than Max”. It is an absolute joy to hear these Sepultura songs being performed and being performed with an intensity that you just wouldn’t expect from a band 30 years into their career. There is no lacklustre here, it’s a passionate and brutal display of what this band has accomplished so far.

All eras are accounted for and stand up next to each other well with ‘Dead Embryonic Cells’, ‘Choke’ and ‘Cut-Throat’ all in the mix. Motorheads ‘Orgasmatron’ paces things out a bit but then it’s songs from the Beneath the Remains, Arise, Chaos AD and Roots that really resonate and send the crowd into heaving mess. ‘Territory’, ‘Refuse/Resist’ easily feature in any self respecting journalists top metal tunes. ‘Ratamahatta’ sees Derrick take control of his own percussion kit to drum along with Eloy. Their brand of metal is so dynamic, thick with layer upon layer of raw individual talent and by the time ‘Roots Bloody Roots’ emerges from the sweat and fog every single person has a gnarly smile upon their face and ears near bleeding point.

Regardless of your past allegiances with vocalists or drummers, forget it. We’re lucky to have Andreas, Paulo, Derrick and Eloy performing these now legendary tracks live. The bonus is that we also get the chance to see Max and Igor Cavalera peppering their sets with Sepultura tunes too. Life is way too short to be bitching and moaning about inter-band bullshit. Lets get on with it and enjoy these guys whilst we can.